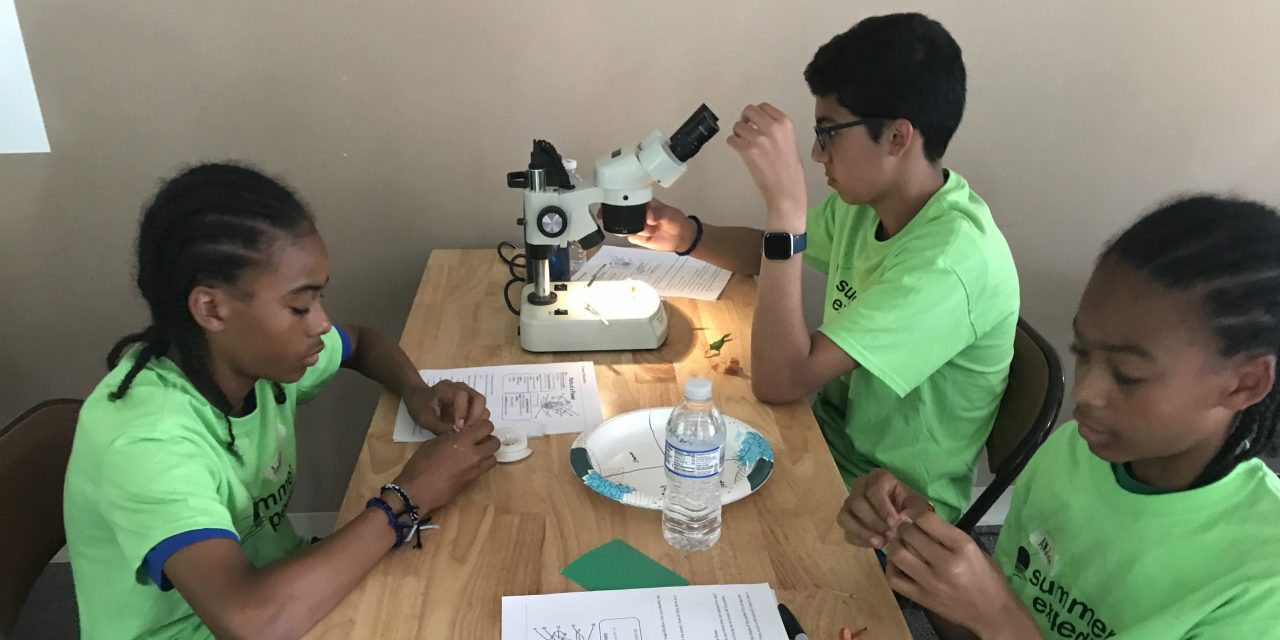 In a typical year, select individuals from some of Columbia’s under-represented youth would come to Columbia College to gain a real look into college life. Traditionally, the participants would close the program with an entertaining commencement ceremony at Launer Auditorium. However, with the pandemic still at hand, the commencement and other exclusive events on the college’s Main Campus had to be postponed.

Despite the adversity, the slew of students and staff participating this year still enjoyed a month-long schedule of engaging activities, tutorials and classroom sessions. In collaboration with the Columbia STEM (Science, Technology, Engineering and Math) Alliance, students had the opportunity to explore connections between art and science. Highlights included classes on origami, snowflakes, recycling, viscosity, mathematics, bugs and flowers.

This year marked the 10th edition of the Summer Expeditions program and the seventh consecutive year that State Farm Insurance has funded the event. During that time, State Farm has contributed more than $61,000 towards the program.

On Wednesday, July 28, members of the Columbia, Missouri, State Farm team and Columbia College representatives were on hand for an official check ceremony recognizing the 2021 edition of Summer Expeditions. State Farm Sales Leader, Ryan Kenney, was one of the individuals inside St. Clair Hall and expressed the importance of the event.

“Everyone knows our company slogan, ‘Like a good neighbor, State Farm is there,’ and we really try to achieve that here in Columbia,” said Kenney. “One of our missions is to have people realize their dreams and the Summer Expeditions program does exactly that. In this past year-plus of COVID and seeing corporations pull back in their giving efforts, we had to do some ourselves, but we knew we must continue to support the Summer Expeditions program with Columbia College and Columbia Public Schools.”

Dr. Terry Smith, Columbia College Professor of Political Science, spearheaded the Summer Expeditions program in its groundbreaking stages nearly a decade ago. Behind his passion and dedication, the initiative has continued to produce outstanding results for the Mid-Missouri community.

“It has been a privilege for me to be a part of this program,” said Dr. Smith. “A former Columbia Public Schools superintendent originally approached me with the idea. They had a cohort of children in their schools that were high achievers, at-risk and didn’t reach all the qualifications for the gifted program. We wanted to remind the children that you were smart enough to accomplish this and you only need motivation and support from your respective school and family.”

“The goal of this collaboration was that if a student who completed the Summer Expedition program later attended Columbia College after high school, they would receive a significant scholarship from us. I’m delighted to announce that this fall ‘21, the very first graduate from the inaugural Summer Expeditions class is enrolling at Columbia College. So, in short, this collaboration ultimately worked. She will be the first of many.”

It’s clearly everyone’s hope that the Summer Expeditions program “returns to normal” in 2022. Even with the external challenges that were presented in this year’s edition of the event, countless individuals across numerous organizations were still able to persevere and give these young participants a time to remember and a potential glimpse into the future.

“We’re certainly grateful for State Farm and Columbia Public Schools being frontiersmen in putting this amazing program on the map,” said Columbia College Interim President Dr. David Russell. “It’s incredibly gratifying to see these students get this college exposure now at a young age and have them realize that higher education opportunities are possible.”