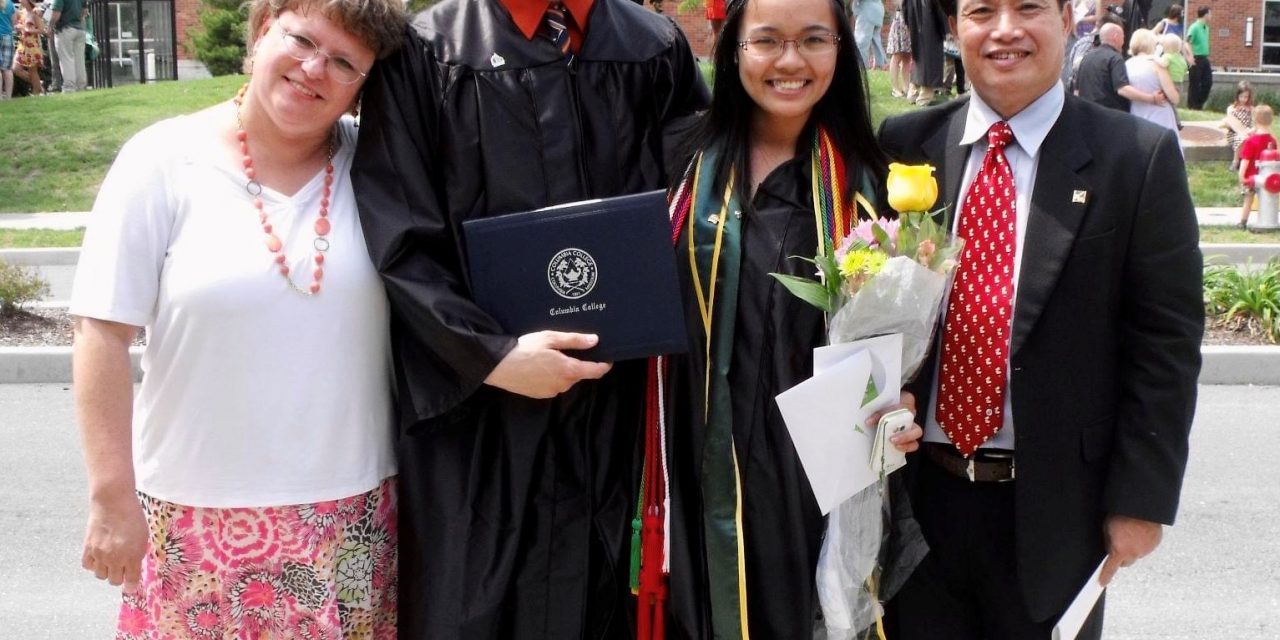 Anh Pham Braddock ’12 ’14, came to the United States as an exchange student from Vietnam at just 16 years old. She arrived in a small town of Staples, Minnesota (population 2,900), which she describes as “so tiny, so rural.” Despite the culture clash coming from the capital city of Vietnam with 4 million people, Braddock stayed the course and completed her senior year at Staples-Motley High School.

“From middle school on, it was a dream of mine to study abroad in the United States,” Braddock says. So, when Columbia College gave her a scholarship, she decided to stay in the U.S. for another four years.

Braddock didn’t seem to think twice about making these big life decisions at such a young age. When asked about whether she’d consider herself adventurous, she just laughs it off. “Well, I like traveling and I like trying new things. Is that what you mean?” she says with a smile.

While scholarships drew Braddock to Columbia College, she immediately jumped into her college experience beyond the classroom as well.

She was involved in countless organizations, took on jobs in Student Affairs, in the Dining Hall and as an intern in the Public Relations office. She also took on a role as a Resident Assistant (RA), all while earning scholarships for academic achievement. She is grateful to her parents for supporting her from Vietnam, but she wanted to help however she could.

Braddock graduated with a major in Marketing and International Business in 2012 alongside her husband, Stephen ’12, who she met as an RA in his residence hall. Stephen majored in Psychology, but they both went on to complete MBAs; Anh in 2014 and Stephen in 2018.

“The reason why I am who I am as an adult is a lot about what I was taught at Columbia College, inside and outside the classroom” Braddock says. “My parents supported me from afar, absolutely, but Columbia College’s liberal arts curriculum certainly helps develop my values, perspective, how to be responsible, how to care for others and how to lead people.”

In November 2020, after more than five years away from the college, Braddock took another job at Columbia College, this time as Director of Web and Digital Marketing.

“It isn’t just a job. It’s like coming home because I grew up here. My adult life is here,” Braddock says.

“Every time I come back to see my old professors or staff who helped me along the way, no time has passed. When I come back, I still feel the culture. It’s warm. It feels calming.”

A self-professed data nerd, Braddock is excited to use her love of data and experience and digital marketing to help move CC forward. “This is where I grew up. It’s how I found my personality. I have a deeper connection to my job because of it.”

Braddock stepped into a role that was vacant when she came, and within a department that had seen some considerable changes. Sometimes, she says, it can feel like you’re walking through a long tunnel. However, she feels the support of her coworkers just as she did as a student.

“Everyone has been super supportive, and kind, and as I keep walking through the tunnel, I keep finding more hands to hold on to along the way.” Braddock says. “There’s so much we can do together. I love the collaborative spirit here. My coworkers have a passion for what they are doing. People really care about the college.”