Virtual gala connects recipients with family and friends around the world 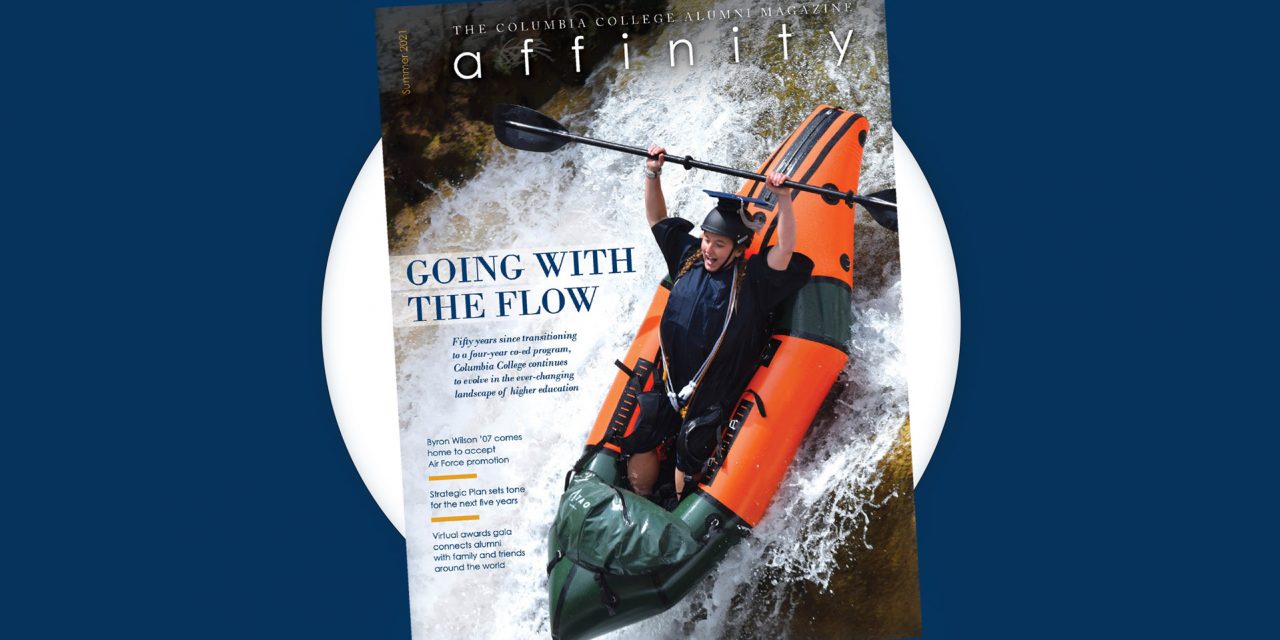 Each year, the Columbia College Alumni Association recognizes select individuals for their personal and professional accomplishments. The nominations are reviewed by a committee of the CCAA Advisory Council and presented at a formal awards gala.

“As always, we had an excellent pool of nominees, however, because we were unable to host our awards ceremony last year due to the pandemic, we decided to limit our very special Class of 2020, and to not add to it for 2021,” says Suzanne Rothwell, vice president for Advancement. “When you are introduced to our recipients, I think you will see why the year-long wait has been more than worth it.”

Gala attendees from around the world gathered in Zoom breakout rooms to mingle and reminisce during a social hour before coming together to watch the awards presentation. The virtual platform also opened the event for the entire CC community to join the celebration. In addition to remarks from college leadership, friends and family members recorded well wishes for each recipient as they accepted their awards. Watch the recording at my.ccis.edu/awards.

Victor Ciardelli always had an entrepreneurial spirit and has used his education to create what has become one of the largest independent retail-mortgage companies in the United States.

When he looked at the mortgage business, Ciardelli saw the customers, the referral partners and employees and knew he wanted to provide a better value proposition than any other bank or mortgage company in the country. He began formulating a plan in the mid-90s, which led to the founding of Guaranteed Rate in 2000.

As president and CEO of Guaranteed Rate, Ciardelli oversees every aspect of the Chicago-based company that includes more than 13,000 employees today.

“What Victor is particularly good at is to survey the entire company and all its operations and all its processes and all its divisions and determines what needs improvement,” says Scott Stephen, Guaranteed Rate’s chief growth officer.

“He does a deep dive and improves it. It’s the reason Guaranteed Rate is always two or three steps ahead of any other company in the mortgage industry.”

Early on, Ciardelli’s mission was to ensure every day that the consumer experience he provided was better than any competitor. “As long as it is and continues to be, we’ll continue to keep scaling and growing the business.”

As the company grows, so does its heart for its employees and communities at-large. Since the Guaranteed Rate Foundation was established in 2012, it has donated more than $14 million to families and their communities in times of hardship or unexpected need.

“It’s important that I look at myself in the mirror and see how I could be better and create a better outcome in any experience,” Ciardelli says. This daily mindset reinforces his core value “growing for good” – the more we grow, the more good we do.

For displaying a spirit of courage in daily life

Pat Hagenbach is co-owner of her family’s business, Philippi-Hagenbuch, Inc. The Illinois-based company provides custom off-highway haulage solutions with a worldwide reputation for excellence and equipment in more than 40 countries.

“Pat is a woman of tremendous grace, courage, integrity and character, wrapped up in quintessential style, a quick wit and the most amazing sense of humor you would ever want to know,” says her longtime friend, Micki McCarthy.

A 1962 graduate of Christian College, Hagenbach recalls the life lessons learned while in school. “My time at CC was filled with learning and wanting to learn due to the encouragement and teaching styles from my professors,” she says. “I learned to have respect for and was open to the viewpoints of others, which developed my ability to be a good listener.”

This trait served her well as she took over leadership roles and managed internal operations. Hagenbach says she built self-confidence and became a thoughtful decision maker, which provided great value in establishing her credibility as a female business owner.

In 1969, Hagenbuch’s husband, LeRoy, and his business partner outlined their company’s vision in the Hagenbuchs’ basement and for more than 50 years, Philippi-Hagenbuch has set industry standards in equipment design and productivity. Hagenbuch took on an active role in 1977, building a name for herself in a male-dominated field.

She has dedicated much of her life to serving her community, often attending events and raising funds for mission-driven non-profits with special attention to helping children and those in need. She received a community service award in 2016 from the Community Foundation of Central Illinois. Fiercely loyal to her family, McCarthy describes Hagenbach as a living example of what unconditional love looks like.

In spite of recent health issues, Hagenbach leans on her faith and unyielding perseverance to continue to support those around her. “Friends and family who have faced their own challenges have found Pat to be one of their most loyal supporters. Again, [she is] putting aside what she’s facing to help somebody else go through what they’re facing,” McCarthy says. “Simply the name of this award demonstrates that you could find no one else who lives a life more courageously than Pat Hagenbach.”

Virginia Zimmerley Stewart has served as a longtime community volunteer alongside her husband, former University of Missouri basketball coach Norm Stewart. Virginia and Norm married when they were young; with Norm just out of college and pursuing a career in basketball.

It was after they started their family that Virginia looked to continue her education. Twenty years after starting her college journey at the University of Missouri, Virginia became one of the early graduates of Columbia College’s Evening Program, also taking Day Program classes, and earned a degree in the travel industry, where she worked for 10 years.

“I remember her studying a lot and I gave her quizzes while she was making dinner,” says Virginia’s son Lindsey Stewart. “She was very excited to get her degree, and that set her on a very successful career path.”

She worked to support the Mini Mizzou pep band, which allowed the group to travel to away games and bring an element of a home game atmosphere on the road. She also launched an advertising agency that produced and marketed the Norm Stewart Show.

Following Norm’s cancer diagnosis and treatment in 1989, the Stewarts leveraged his celebrity to form the Coaches vs. Cancer initiative. To date, basketball programs nationwide have raised more than $130 million for the American Cancer Society. In 2014, the couple founded the Virginia and Norman Stewart Cancer Center at Boone Hospital Center (now Boone Health), which supports every cancer-related service the hospital offers, including community outreach, screening and surgery.

“We get invited to a lot of places maybe because of me, but we’re invited back because of her,” Norm says.

Longtime family friend Ramona Lucas Smith ’88 recalls Virginia’s many contributions in Columbia, Missouri, and beyond through her compassion and drive. “Many people think of Norm as the face, but she would be the one who would make it happen,” Smith says. “She encourages everyone she sees to do the things to keep themselves happy, whether it’s for their mental health, physical health or family health.”

While Virginia has impacted the community through the couple’s professional endeavors and volunteer outreach, the family shares a humbling spirit for all she’s accomplished. “I just know her as my grandmother,” says granddaughter Genevieve Dunning. “She’s so sweet, so funny – the life of the party.”

“Virginia, this is your award,” Norm says. “You achieved this all on your own. I’m so proud of you, and I congratulate you.” In celebration of this award, Norm announced during the gala the formation of the Virginia Zimmerley Stewart Endowed Scholarship that will be awarded to Columbia College students who share Virginia’s drive to complete an interrupted education. For more information or to make a gift in Virginia’s honor, please visit my.ccis.edu/stewart.

Donna Osborne Bradley’s extensive resume includes more than 20 years of experience as an attorney and educator. At her core is a passion for teaching and a tenacity that fuels those around her to succeed.

Bradley found her way to Columbia College during a pivotal time in both her personal and professional life. When her son David passed away unexpectedly in 2009, she experienced severe depression in the months that followed. It was her son Dominic Griffin and goddaughter Shemia Reese, both attending Columbia College at the time, who encouraged her to go back to school.

“There’s nothing like receiving advice and wisdom and knowledge from someone who has been where you are,” Reese says. “She understands the struggle. She understands the good times. It allows someone to be vulnerable and open up to receive everything she has to give.”

While Bradley already held a law degree, her earlier education was completed long before the widespread use of personal computers and she was hesitant to sign up for online graduate courses. Thanks to the phenomenal experience with her professors and classmates at CC, Bradley completed her master’s degree and was inspired to continue with a Ph.D. in public safety and criminal justice at Capella University. She has also completed coursework toward a doctorate in education at Lindenwood University.

“It’s kind of like a bragging right now. My mom’s a doctor,” says her son Myron Evans.

From there, Bradley pursued a full-time career in higher education. She has taught numerous human resource management and criminal justice courses to graduate and undergraduate students at multiple colleges, including Columbia College.

Dr. David Gerlach, president of Lincoln College in Lincoln, Illinois, first met Bradley in a brief introduction during an interview last year for a leadership role at the college. It only took a few minutes for Gerlach to know Bradley was the perfect person for their campus. “Before she left that campus that day, I told the vice president that she needed to hire her on the spot. Don’t let her leave campus without hiring her.”

Bradley began her tenure as Lincoln’s vice president of Academic Affairs in January, and Gerlach sees even more in her future. “Donna will be a college president,” he says.

“Not only do I believe that to be true, it’s what I aspire for her.”

Bradley has also impacted countless lives by serving an inner-city ministry for 16 years and working as the education and outreach coordinator at St. Louis Metropolitan Equal Housing and Opportunity Council.

“From donations to getting the community involved in food drives or clothes drives, she has a way of bringing people together,” Evans says. “You have some people who try to do it from the outside, but Donna’s the type of person who goes in to the community so she can address what is really happening.”

Bradley’s longtime impact has spread throughout her community and beyond the classroom to solidify her passion for education. “She won’t solve your problem for you, but she’ll make sure you have the tools to handle whatever’s in front of you,” Evans says.

The CCAA created the Alumni Awards program with the organization’s founding in 1963 and continues to celebrate members every year who share an affinity for the rich history of college and personal commitment to excellence. To view past recipients or submit a nomination, please visit my.ccis.edu/awards. Gifts may be given in honor of award recipients. Visit my.ccis.edu/givenow to support the Columbia College Fund or an individual scholarship, and indicate the individual to be honored with the gift at the bottom of the form.