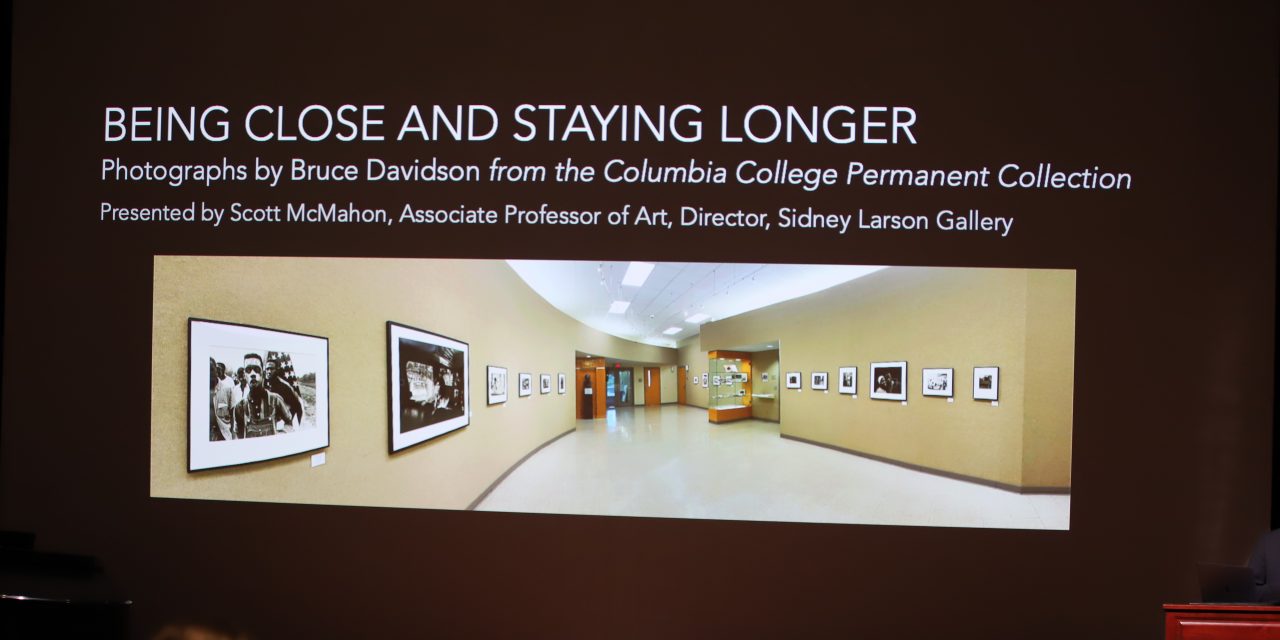 In 2018, Columbia College accepted one of the most significant donations of art in its then-167-year history, taking possession of 365 photographs – valued at $1.2 million – made by world-renowned documentary photographer Bruce Davidson into its permanent collection.

Led by Associate Professor of Art Scott McMahon, members of the Department of Visual Arts and Music spent months cataloguing, storing and preparing the works for display and educational use. On October 14, the college celebrated Davidson’s work, as well as the value of the liberal arts, with a colloquium in Bixby Lecture Hall.

The colloquium was a culminating event for the Davidson exhibition, which was on display for eight weeks this fall in the college’s two galleries in Brown Hall. “Being Close and Staying Longer” featured photographs from three major thematic bodies of work Davidson created between 1959 and 1970 (East 100th St., Time of Change, and Brooklyn Gang) in the Sidney Larson Gallery, which McMahon oversees.

The Greg Hardwick Gallery, managed under the direction of Associate Professor of Art Bo Bedilion, featured publications, a video interview with the artist, and two photographs by W. Eugene Smith (one of Davidson’s mentors). Students from a creative writing class also wrote stirring, insightful poems using Davidson’s photographs as inspiration.

Following an introductory performance by the Jane Froman Singers, McMahon provided greater detail into Davidson’s art, particularly the way he documented the lives of his subjects with sensitivity and sympathy. Much of that is owed to the fact that Davidson spent long periods of time, sometimes years, with his subjects.

McMahon shared the joy of learning that one of the original prints in the collection is also published in the text he uses for his History of Photography course. He also spoke of the interdisciplinary opportunities various faculty have taken advantage of with such a collection, such as graphic design students using Davidson photos as the basis for a magazine-spread assignment.

The colloquium itself featured that spirit of interdisciplinary study as well. Distinguished Professor of History Dr. Brad Lookingbill presented a lecture that put Davidson’s photographs from his iconic Time of Change series in the historical context of the Civil Rights era. “[Time of Change] not only reveals protests on America’s streets, but also documents aspects of life in New York City, Chicago, South Carolina, Georgia, Mississippi and Alabama. One can sense the expressions of silent subjects, their focused eyes, uneasy postures and tense jaws. From his record of a generation marching to a different beat to quiet moments in carnivals, jukebox joints and ice cream stores, his photographic images stand as one of the most compelling primary-source collections from this turbulent period of American history.”

“We can all learn a lot from these photographs. Bruce Davidson documents his subjects with sensitivity, empathy, and honesty. He records the complexity of humanity not just through the lens of a curious observer or bystander, but with his heart and soul.”

Monacell arranged for the students to meet with Associate Professor of Art and Department Chair Danielle Langdon in Brown Hall, where they viewed prints from the collection up close, and learn about the context of the photograph. The students then each wrote a poem inspired by the photograph they had selected. “I’m very proud of the students and their work, I’m very glad that the students are here to share their poems with you,” Monacell said, “and I’m very glad that they had the opportunity to work in this interdisciplinary way in the humanities at Columbia College.”

While the exhibition’s run concluded on October 20, the college plans on holding additional exhibitions highlighting work from this collection in the future.