Forged in Fire: Pasley ’02 is building community through the Columbia Fire Department 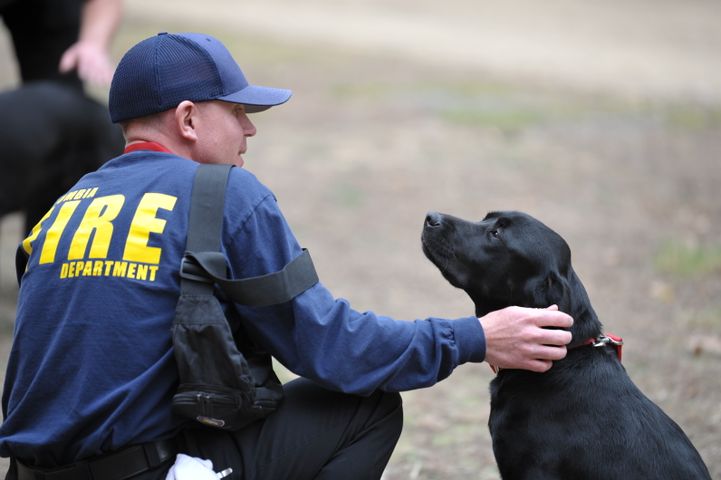 For Jim Pasley ’02, Columbia College has made a significant impact in virtually every aspect of his life. The college’s ties run deep in his family, as his wife, Melissa Pasley ’03, and parents Jim Pasley ’87 and Karen Pasley ’01, are all proud alumni. During each of their respective times at CC, they worked full-time jobs while completing evening courses. The ability to advance their professional careers while also obtaining higher education degrees was an invaluable experience.

“My entire family enjoyed attending the numerous public-relations festivities which were held at the Lake of the Ozarks,” Pasley said. “Events such as the CC for a Cure Golf Tournament, Coffee at the College and open houses were well-received by the community.”

Serving as a strong and welcoming face in the community is nothing new for Pasley. Throughout his personal and professional career, he has continually prioritized time to give back to the Columbia, Missouri, community. At the 2015 Columbia College Alumni Awards, he was the recipient of the Community Service Award for “demonstrating outstanding contributions in serving one’s community.”

For the past near two decades, Pasley has served both the Boone County and Columbia Fire Departments. Beginning as a volunteer firefighter, he continued to work hard to advance in his career and was later promoted to assistant fire marshal. In that role, Pasley was tasked with the inspection of all colleges and universities in the Columbia Fire Department’s jurisdiction. Assignments included providing public education and public safety instruction for each institution.

“I enjoyed the opportunity to work with some of my previous Columbia College instructors and administrators which I had met while attending the college,” Pasley said. “I took the most enjoyment in providing public-safety messaging to the students. These opportunities have also continued in my current role, including participating in mock interviews with current Criminal Justice students. Each time I participate in the interviews, I’m afforded the opportunity to listen to the students and hear how Columbia College has been an integral part of their education, similar to my own journey.”

Today, Pasley is the Fire Marshal Division battalion chief for the Columbia Fire Department. In 2017, he became the handler of the department’s newest accelerant-detection canine, Izzo. The energetic black Labrador retriever was trained to detect gasoline, lighter fluid, kerosene and other accelerants used to start fires. As a valuable member of the team, Izzo joined Pasley for more than 50 suspicious fire investigations throughout the Mid-Missouri region.

This past May, Izzo sadly passed away after a sudden illness. Izzo not only served the local community by aiding arson investigations, but also touched the lives of countless individuals through public-education initiatives.

“Izzo was an exceptional accelerant-detection canine,” Pasley said. “During his time with us, he was not only a member of the fire department, but also a real member of the family. Izzo was a true working dog and performed his duties well. He was also an integral part of our public education outreach in the Columbia community. He was in parades and went to nursing homes. He certainly made his rounds across Missouri. Izzo and everyone he met really enjoyed those interactions.”

Combining his joy of serving as the department’s accelerant detection canine handler and giving back to the community, Pasley is looking forward to continuing that role with the Columbia Fire Department.

“I was recently contacted regarding the possibility of obtaining another canine and I have chosen to proceed,” Pasley said. “I will again be paired with a canine provided by Maine Specialty Dogs and the State Farm Insurance Arson Dog Program. Upon the completion of our training and certification, we fully intend to provide the same level of service to the community.”

As he looks ahead at his personal and professional journey, Pasley remains dedicated to positively impacting lives in any way possible. Whether it’s outside the workplace as a volunteer with the Southern Boone youth sports programs, 9/11 remembrance events or educating all age groups through his job with the Columbia Fire Department, there is no doubt that the local community will continue to benefit from his dedication.

Reminiscing on his incredible adventures thus far, Pasley noted that his time at Columbia College played a key role into his self-development. To no one’s surprise, he has no intention of stopping his selflessness acts.

“Obtaining a degree in management from Columbia College has definitely helped me progress in fire service,” Pasley said. “In my current role, I work with local businesses, philanthropies and design professionals daily. Achieving a business degree, which included courses such as finance, management, marketing, and public speaking provided me with the educational foundation needed to manage my division and perform my assignments.”

“I will continue to provide my best efforts for the betterment of the Columbia Fire Department and our customers. Whether that is through instruction, community risk reduction, public relations, or investigations, I’m happy to assist wherever I’m needed.”