“Fromanette” reflects on her friendship with Jane Froman ’26 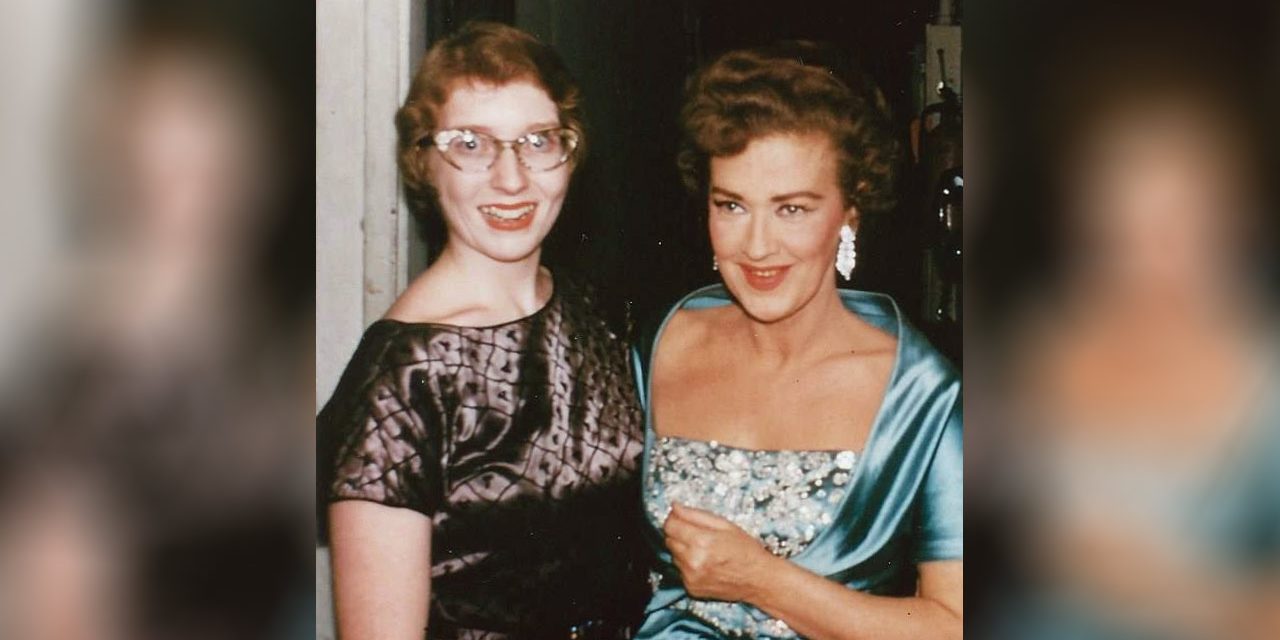 Carol Peck has lived in Hilton Head Island, South Carolina, for 50 years. David Lauderdale, a columnist for the local daily, “The Island Packet,” for years offered writers his Monday columns to provide a story of an unusual local resident they have known. On March 2, 2010, Packet readers learned of the special friendship of Carol Peck with Christian College alumna Jane Froman ’26, a friendship that impacted her life completely. Here is that article.

“A Two-way Street” by Jim Pegolotti

Jane Froman died in 1980, but she very much is alive in Carol Peck’s home on Hilton Head Island. Inside the Sea Pines home, a variety of framed photos of Froman, one of America’s finest female singers from the 1930s to the 1960s, have prominence. If you ask the exuberant, golden-haired Carol “Why Froman?” her answer is simple: “She was a wonderful example to me, and if I could have had a second mother, I’d have chosen her.” Ask more questions and the story unwinds of Froman, a brave and determined woman, and her friendship with a fan such as Carol.

The story of this friendship begins on an April day in 1952 in Colorado Springs, Colo., where Carol, a high-school teenager from Chicago, was vacationing with her family. She couldn’t go golfing with her parents because walking for Carol was difficult due to the cerebral palsy she had been born with, so that day she decided to go to a movie.

She chose “With a Song in my Heart,” a screen biography of Jane Froman, a choice that would affect her life deeply.

Before seeing the movie, Carol knew nothing about Froman, a woman whose life had been nearly ruined by massive injuries from a plane crash. During World War 11, on Feb. 22,1943, the amphibious Pan American Yankee Clipper carrying her and other USO entertainers to Europe, landed badly in the Tagus River near Lisbon, Portugal. It topsy­turvied and split apart.

Of the 39 aboard, 15 survived, including Froman. The injuries included a broken arm, a nearly severed leg, a dislocated pelvis, broken ribs and pieces of wood and metal imbedded in her skin.

Through bravery and determination, she returned to the world of entertaining less than a year after the crash with the help of specially constructed stage settings to help her stand.

As Carol watched the movie, she formed an empathetic connection to Froman’s world of medical difficulties because she, too, had persisting physical difficulties. For two years, the teenager read everything she could find about Froman. From her home near Chicago, Carol also started a lengthy and informative correspondence with a group of similarly aged and impacted fans in New York who had baptized themselves the “Fromanettes.”

‘SONG IN MY HEART’

Carol pieced together more than the movie told about Froman, whose mother, a music teacher, recognized early that her daughter had a rare singing voice. From the St. Louis area, they settled in Columbia, Mo., where Jane attended Christian (now Columbia) College. After graduation, in 1928 Froman went to the Cincinnati Conservatory of Music, sang in programs over that city’s powerful radio station WLW and got a contract to sing for three years with the Paul Whiteman orchestra. Helped by Don Ross, a public relations man who would become her first husband, by 1934 she was on Broadway in that year’s Ziegfeld Follies, sharing the stage with the famous Fanny Brice.

Recordings and radio appearances brought her national fame, such that when the famed Broadway producer Billy Rose was asked to name the 10 best female vocalists, he replied: ”There is Jane Froman and nine others.” Naturally, Hollywood called, but her movie appearances were few because of a significant problem: she stuttered. Strangely enough when she performed on stage, her stuttering disappeared.

For Carol, all the information she gathered about the singer solidified her determination to see Froman in person.

The opportunity arose when, on Oct. 18, 1952, only six months after Carol had seen “With a Song in My Heart,” Froman began a weekly television program, which Carol watched religiously. She finally convinced her mother to go with her to see the “Jane Froman Show” in New York and hopefully even meet Froman.

On April 1, 1954, Carol and her mother were in the show’s audience. Earlier in the day they had met many of the Fromanettes. But meeting the singer was not to be; that would occur three years later.

While Carol attended college, she continued her correspondence with the Fromanettes. In their long letters they decried the end of Froman’s TV show after three years, as well as their surprise that the singer’s second marriage was now over. Carol also joined a Chicago Froman fan club and early in 1957 the club’s president, Jack Lewis, found out that Froman would be appearing at The Beverly Hills Country Club in Covington, Ky., not far away.

Carol, Jack and Carol Kennedy, another longtime fan, arranged to attend two nights in a row. During those two evenings, carol recalls, “Magic happened, and we never got over that magic.”

Froman welcomed them backstage both nights. She wanted to know all about them. On the second night, she arranged for them to sit at a front-row table. After announcing that her encore would be “I Believe,” the song that had been written for her, she also announced it was dedicated to “three friends of mine who came all the way from Illinois.”

After that, there was no doubt in Carol’s mind of the affection Froman had for her closest fans.

During the next two years, Froman withdrew from all performing for more back surgeries and rehabilitation. In 1959, she returned to performing at Chicago’s famed Chez Paree. Carol, now out of college and working near Chicago, set a record by seeing Froman’s show 13 times, with more than a few visits backstage with the singer.

Two years later in 1961, Froman surprised everyone by announcing her retirement. She sought quiet time back in Columbia and stayed for a year at the home of her mother. Then a new friend came into her life: Rowland Smith, a journalist and longtime resident of Columbia.

The two Carols and Jack got a pleasant surprise in June 1962 — an invitation to Froman’s wedding to Smith. It was at the reception that Froman’s Columbia friends were heard to ask: “Who are these young people?” Unknown to so many there, Jane, who never had any children, had relied on her special fans, her “children,” for emotional support during many of her numerous medical difficulties.

Throughout the 1960s, the two Carols visited Froman and Smith in their new home. She told them of the joy of renewing a supporting role for her alma mater, Columbia College. Unhappily in some visits, they found Froman bedridden from cardiac issues and lung problems, constant off-shoots of the airplane crash, but she always welcomed them, even if they had to sit around her bed as they chatted.

When Carol and her father and mother moved to Hilton Head Island in 1972, she continued to fly out to Columbia to visit Froman at least a couple times a year. Carol’s new friends on Hilton Head, learning that her visits were to Jane Froman, were puzzled.

“My friends,” Carol remembers, “thought of fans as the kind that frenetically grabbed at their idols as they passed by. They couldn’t realize what a wonderful example she had been for me.”

Nor could these friends understand what the fans meant to Froman. An episode helped explain that bond.

After one of the few shows that Jane gave in the Columbia area during her retirement, Esther Griswold, a local broadcast reporter, went to speak to Froman. She found the singer chatting comfortably with Carol and four other longtime “children.” In the interview, Esther questioned Froman about her closeness with the fans. As Esther was leaving, Carol introduced herself and told her how important Froman had been to her over the years. The reporter, reflecting on what she heard from Froman, told carol the simple truth: “Don’t forget that it’s a two-way street.” Few statements made it clearer to Carol what she and others meant to their close friend.

On April 22, 1980, Jane Froman died. Carol and several others of the “children” attended the funeral. Smith, Froman’s husband, decided against a eulogy and only the playing of “I Believe” by the organist brought something of Jane alive to the mourners.

During the service, Carol recalled that several years before she died, Froman had brought her “children” face to face with that eventuality. During a visit with them, she asked them not to grieve when she died. One of them ran out of the room crying, but Carol looked directly at the woman who had been her strong guide and inspiration and said: “I promise I won’t grieve, but we will miss you.”

Carol, whose life has been transformed by a movie and a resulting friendship with Jane Froman, often wonders how many others in the years ahead will be affected by this story of the woman whose beautiful voice and resurgent life shows the human spirit at its finest. Meanwhile, she treasures the memories of the time spent in a “two-way street” with a most heroic woman.