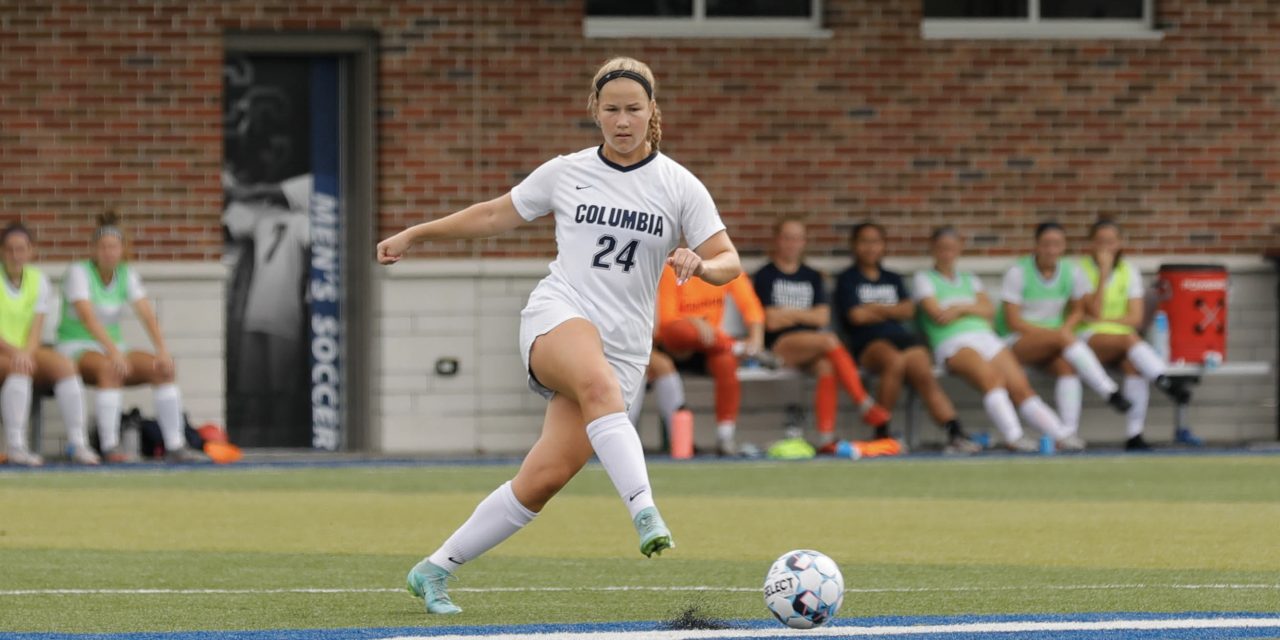 She’s just come from an advising appointment, where she mapped out a potential double-major. Earlier in the day, she answered phones in the Columbia College Student Affairs Office and assisted fellow students getting pictures taken for their student IDs. Later, she’ll head to R. Marvin Owens Stadium for soccer practice, and she’ll certainly hang out with friends afterward.

It’s all in a day’s work for junior management major Greta Haarmann, and it’s all done with a smile.

Jenna Richard, who is Greta’s supervisor in the Student Affairs office, recalls Greta making an impression as a natural leader when they first met. She noted how that has carried over as Haarmann enters the last half of her college career. “She takes initiative when she comes into work in Student Affairs, keeps other students accountable with classwork, and leads through her actions on the soccer team,” Richard said.

Haarman was an all-district soccer player all four years at Jefferson City High School and made all-state her senior year, which motivated her to continue playing in college. She went on a school-arranged admissions day trip to Mizzou, Moberly Area Community College and Columbia College, and while the campus made a decent first impression on her, she still wasn’t sure it was the place for her. “I had the image in my head for so long that I wanted to go to a big school,” Haarmann says.

It wasn’t until women’s Assistant Coach Meg Goddard reached out that she started considering CC, and Haarmann credits a former fellow Jay – and then-junior on the Cougars’ soccer squad, Kaitlyn Tambke – with convincing her that it was the right move. “Katie said that it’s a good size and there’s a lot of stuff to do, so I gave Meg a chance.”

Haarmann’s start at CC wasn’t all sunshine and roses; like most freshmen, she spent time on the bench, sometimes feeling like an unimportant part of the team. She even considered quitting the game she loved. Yet she persevered, and when Tambke graduated, Haarmann slid into her role on the pitch. “It was an adjustment, it was humbling,” she said. “But then the love of the game came back. It was perfect.”

Haarmann credits her parents, Kay and Don, for their support throughout her life. They never miss a match. “They were the ones that kept me pushing when I went through that tough patch in soccer and in life. They’re my biggest supporters, and I’m just grateful for them and that they told me to stick with it, because these past two years, I’ve been so happy. School, soccer, it’s just so much fun.”

While the pandemic turned everyone’s world upside-down – as one small example, the soccer team’s 2020 schedule was split in half and spread out over all of last academic year – Haarmann thrived. “I made so many different friends and connections, and I just made sure that I got out of my comfort zone and didn’t just stay in my own little bubble.”

Richard is not surprised at how Haarmaan has blossomed at Columbia College. “Her leadership ability, coupled with her motivation and wonderful sense of humor, will take her far in life!”

On the soccer side of things, the pandemic ultimately fostered the best team chemistry Haarmann’s ever experienced. “We were all sisters at that point in the season; we were all just so compatible. We played well together on the field, and then off the field we were so close. Team chemistry makes the biggest difference in whether you enjoy the sport or not.”

That chemistry carried over to this season, where Columbia College went undefeated in American Midwest Conference play and secured the championship title for the seventh consecutive year on November 11. Haarmann figured prominently in both of the Cougars’ final wins to earn the trophy. On November 8, she capped CC’s scoring outburst in a 5-1 semifinal win over Missouri Baptist with a goal off a corner kick.In the title showdown with Harris-Stowe, Haarmann made a spectacular pass from midfield to allow Macie Lucas to tally the lone goal of the match.

Following the championship game, Harmann was one of five defenders named to the AMC’s All-Conference First Team.

While the Cougars’ season ended in the second round of the NAIA National Tournament over the weekend, Haarmann is overjoyed at her decision to come to Columbia College. “If I wouldn’t have played, that would have been my biggest regret. I’m so grateful for all the opportunities here, and everything that CC has given me,” she says. “I’m just very grateful for how it’s all worked out. It’s been a really great experience for me.”