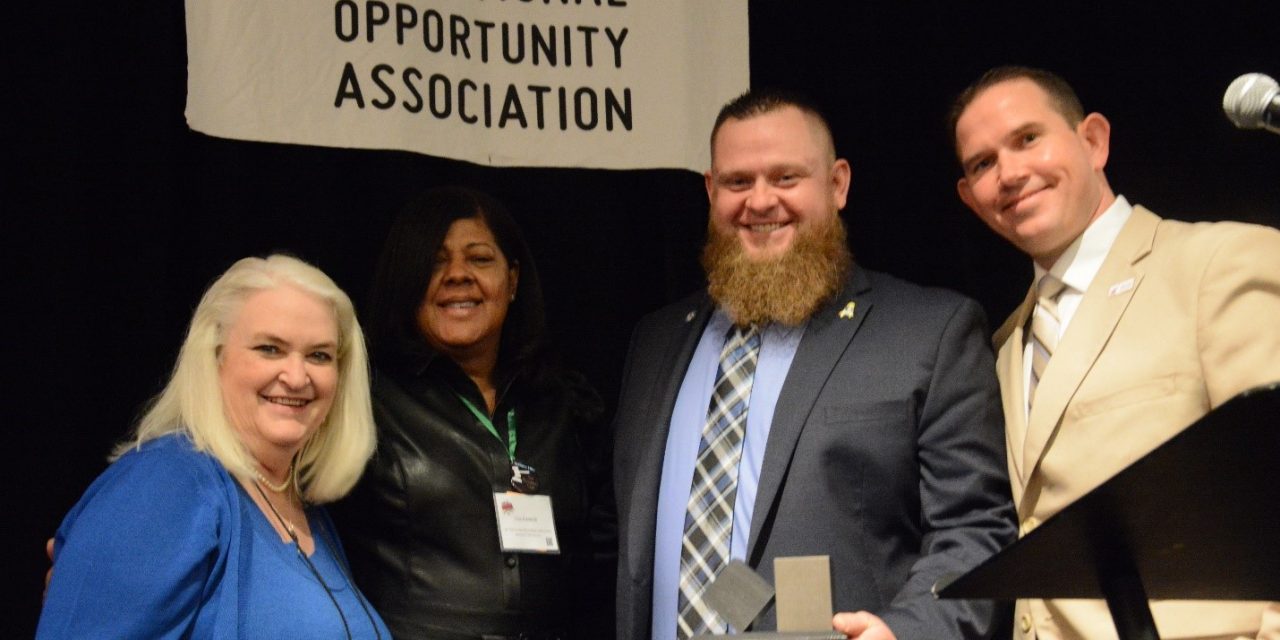 Jared Reichel ’16 is certainly no stranger to being recognized by his peers. In April, he was one of three recipients of the Educational Opportunity Association (EOA) TRIO Achiever Award. Reichel was honored for his outstanding civic, community and professional contributions at the MO-KAN-NE three-state chapter award presentation.

Throughout each year, the EOA aims to provide educational opportunities for first-generation, low-income, underrepresented, disabled students and veterans. Reichel and his past experiences with Columbia College’s TRiO Student Support Services (SSS) program led to his current involvement with the professional EOA TRIO organization.

Last month Reichel traveled to Indianapolis for a TRIO Achievers’ Luncheon at the annual EOA conference. At the event, he was officially named a 2021 EOA TRIO Achiever, becoming the first Columbia College graduate to receive the national award.

“It was an extremely humbling experience,” Reichel said. “My fellow TRIO Achiever awardees were professors and doctors and as I sat on stage waiting to accept my award and listening to the two educators, I found myself asking, ‘Why and how was I there with everyone else?’ As I reflected, I know it’s because of the motivation and encouragement I received from Columbia College and specifically the staff of the Columbia House.”

Reichel’s journey with the college began in 2010, as he returned to mid-Missouri following a five-year tenure with the U.S. Army. With his ambitions of achieving academic success at an all-time high, he ultimately met with former SSS Advisor Tina McNeil and knew he found his higher education destination.

Behind inspiration from his professors, Reichel became more active on campus and vowed to make a long-lasting impact on the college. Soon after, he joined the Columbia College TRiO SSS program and later would be named president of the organization.

Columbia College TRiO SSS Advisor Kim Coke has corresponded with Reichel, who recently became a member of the Columbia College Alumni Association Advisory Committee, both during his time as a student at the college and post-graduation. Currently, Reichel serves as a Realty Advocate Manager at Veterans United Realty in Columbia. Over a decade following his first encounter with the college, he remains a strong figure across the local community.

“Jared has been a vocal supporter of all things Veterans United, Columbia College, and TRiO Student Support Services,” Coke said. “The TRIO program is designed to help individuals realize their potential and provide support, encouraging them to attain their educational goals. Jared is an incredible model of the success that can be achieved through support and determination. He benefited from participation in our program and we now benefit from his contributions to our community. He continues to inspire our current TRIO students through his example.”

There is no doubt the success Reichel has experienced following graduation will be a source of inspiration for current and prospective members of the college’s SSS program.

“The message I would give to current and prospective students is to drive on and trust the people that Columbia College surrounds you with,” Reichel said. “If not for the SSS program, I wouldn’t have graduated with honors or pushed myself to be so active on campus and my community. They supported me in ways that no one ever has before, and it has given me the confidence to become the best at everything I do. Stay the course, trust the process, and believe in the staff at the Columbia House. They will take you to limits you never knew you had!”