Saturday’s commencement one for all ages 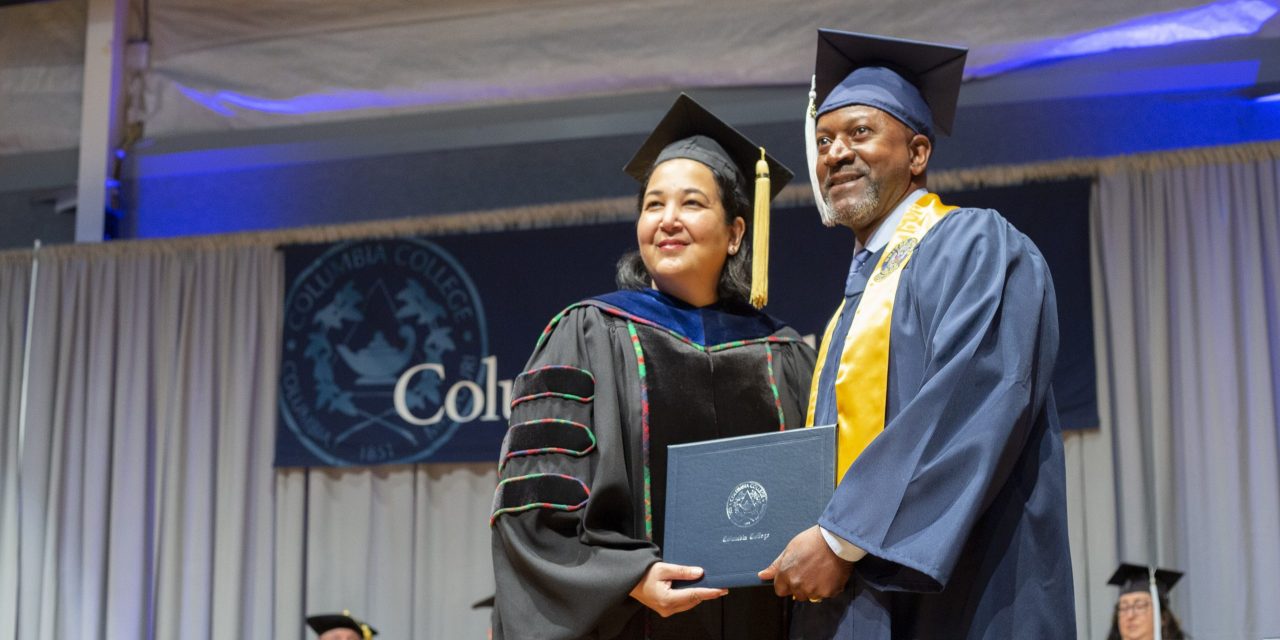 Columbia College’s commencement speaker was a traditional student who grew up just miles from Main Campus. One couple traveled from South Carolina to receive master’s and bachelor’s degrees. A future nurse persevered through a period of homelessness, another followed in her daughter’s footsteps, and a former sailor overcame the loss of a half-dozen of his shipmates.

Among the hundreds of unique stories that began, in some cases, decades ago, they all converged to a shared result Saturday: a degree from Columbia College.

A total of 243 graduates from 12 different countries – Benin, Brazil, China, Malaysia, Mexico, Nepal, Nigeria, Pakistan, the Philippines, Thailand, the United Kingdom and the United States – participated in two commencement ceremonies inside the arena at Southwell Complex.

Dr. David Russell presided over his first commencement since being named as the college’s 18th president in October, as well as the first ceremony held on campus in two years. Before introducing the day’s commencement speaker, he addressed the room of graduates.

“When you started your path toward this milestone that we celebrate today, you had a vision of how a degree from Columbia College might change your future,” Russell said. “You may have worked to become the first member of your family to earn a college degree, or strove to become the latest in a long line of relatives to become Columbia College graduates. Or, you may have just wanted to expand your career opportunities or to finish a degree you started years ago. Whatever the reason, the Columbia College family is proud to have played a part in helping you realize your vision and providing you the tools you will need to achieve material success and spiritual peace.”

Audrey McBride, a Harrisburg, Missouri, native who received her Bachelor of Arts in Biology and a minor in psychology, gave the day’s commencement address. She shared memories of serving as a student ambassador, first-year mentor, and volunteering for a crisis text line. “I know change can be scary, but in my opinion, I think not changing is much more frightening,” she said. “I love reflecting on the ways I have grown and adapted. I also love to put myself into situations that will force me to change.”

For many of these graduates, their lives have certainly changed forever after today’s ceremony.

Ready to run his own ship

As a naval petty officer, Vincent Grice used to have to run a tight ship. Now, he’s ready to run any organization’s personnel.

Grice served his country for 22 years, beginning with the world-famous Golden Dragons at Naval Air Station Lemoore, before retiring in 2004. He was deployed aboard the USS Ranger when a fire on the ship killed six crew members in 1983. “It was a trying experience for me at a young age, having to man up and know that the ship is all you’ve got.”

Grice was at Fort Knox where he happened to meet someone else from his small, Florida panhandle hometown of Mount Pleasant, Florida; her name was Carla, and they would soon marry. It was when he and Carla moved to her Army assignment at Fort Drum, New York, that she encouraged him to enroll in college.

Thankfully for Columbia College, that was at the time one of the installations on which the college had a location. Once Carla was promoted to a position at the Army Sergeants Major Academy at Fort Bliss, Texas, and then again to her current post at Buckley Space Force Base, Colorado, Grice moved his studies online. “Here I am, three years later, with a bachelor’s degree in human resources,” he said.

He works on post at Buckley as a civilian human resources assistant, and is looking forward to deciding whether to return to public service or the private sector for his human resources career. “Columbia College has opened up so many opportunities for me. I’m so happy and excited that I could complete my degree with Columbia College, because it’s been a great experience,” Grice said.

Going away and coming home

Peter Hall had been working in various education-related jobs, including as a substitute teacher, before deciding to take classes toward earning a teacher certification from Columbia College’s Evening Program in 2015.

With his parents and sister having moved to South Carolina, and with the family of his wife, Ashley, in Iron County, Missouri, Peter started looking for jobs near either of the couple’s families. He took a position in 2016 as an English teacher at Mullins High School in Marion County, South Carolina, located about an hour northwest of Myrtle Beach, and has been there ever since.

As he was looking to attend graduate school, Peter decided to stay with the school that got him his certification – with online classes, it was no problem to enroll from South Carolina – and on Saturday earned his Master of Arts in Teaching from Columbia College. “I’ve enjoyed my experience here. It was definitely the right route to go for me. The quality of instruction has been high; I credit Dr. Clevenger.”

Ashley had studied social work and art at Southeast Missouri State University and the University of Missouri, but hadn’t yet completed a degree. Once they moved to South Carolina, she was able to obtain a position as a children’s librarian without a degree, but soon learned she wasn’t going to get much further without one. So last December, she began taking classes online, and on Saturday earned her Bachelor of General Studies. “It’s been awesome, and taking classes online has been super convenient,” Ashley said. While she is currently serving as a substitute teacher at Mullins with Peter, she is now planning on going to graduate school, possibly to further advance her career as a librarian.

All in the Family

Long before she had spent 33 years as a stay-at-home mom, Wendi Arnold knew she wanted to become a nurse. Going through a rough divorce gave her the impetus to strive toward her dream. “I decided that it’s time for me to go back to work and figure out how to provide for myself,” she said. “I was scared to death to go to college – I’d never gone to college – so I went back to school, and I think it was just the motivation of the difficult things that had happened that kicked me in to get into my dream, so I went after it.”

As Arnold starting working through her prerequisites at a school in Reno, Nevada, her daughter, Megan Asplund, had started nursing classes of her own on Columbia College’s Main Campus.

As they proceeded down relatively parallel paths, Wendi noticed that Megan was checking classes off her list faster thanks to the college’s eight-week sessions. “She’s saying, ‘Mom, you can get through this program so much faster here. Move to Columbia to go to school with me! So I packed up a U-Haul, moved here and got enrolled at Columbia College.”

Because she was a semester ahead of her mother, Asplund was able to give Arnold a heads-up about various challenges different classes would provide. “She taught me the ropes. It was kind of cool,” Arnold said.

Asplund graduated in May with her Associate in Science in Nursing (ASN), and has been working at University Hospital in Columbia in the Progressive Care Unit. Arnold earned that same degree Saturday, and will begin her dream job – in neonatal intensive care – in February at Women’s & Children’s Hospital. “I feel incredibly fulfilled, just so grateful that I had this amazing journey of learning. I’ve become stronger and different in a lot of positive ways,” Arnold said. “Watching my daughter do it ahead of me was really inspiring, too. It’s been an amazing growth experience.”

From homeless to helping others

Lexi Lageman moved from Indianapolis to attend Columbia College following high school, but realized a bachelor’s degree in English wasn’t going to put her on the career path she was interested in, so she paused her educational pursuits. She also was in a bad relationship, and to get out of a dangerous situation, she and her dog ended up sleeping in her car, and then a hotel, for a period of time.

Lageman was able to find work as a certified nursing assistant, and then as a licensed practical nurse, which allowed her to eventually get an apartment of her own. “My dog and I slept on a mattress in the middle of the floor. We didn’t have any furniture, we watched DVDs on a laptop and I just lived like that for a while,” Lageman said. “Then one by one, I just got thing after thing that I needed and kind of just built back up. I think the main thing was just I never quit on myself.”

After several years, she got married and bought a house, and was also ready to take the next step in her career, which brought her back to Columbia College to work toward an ASN.

“I really enjoyed it when I came the first time. I think it’s a beautiful campus, and the faculty are amazing, so I didn’t even think about going anywhere else, honestly. The nursing faculty here are just completely wonderful. I couldn’t have asked for a better support.”

Three days before the cohort began, she gave birth to a healthy girl. “She’s really motivated me. I never gave up on myself, but with her I’m doubling down. I want her to have the best life that she can have. I’ll absolutely never give up on her, so when I was going through this she really inspired me to just keep going no matter what.”

Lageman is now working in the ICU at Boone Hospital Center, is ready to immediately begin work on her Bachelor of Science in Nursing, and credits Senior Clinical Instructor Jill Myers for helping her to her current position. “She found opportunity after opportunity for us to learn. Anything cool that was going on, any equipment, anything new, she would find us and show us and she really made me want to work in the ICU.”

Nearly 30 education graduates and their families assembled inside Dorsey Gym for the semi-annual Nearing Certification Ceremony. It honors students who have completed requirements by the state of Missouri to become certified to teach.

Among them were Tyus Monroe, who graduated in May and has been student-teaching at her alma mater, Hickman High School, and Kristen Kreutzer, who is the sister of Lake of the Ozarks Assistant Director Danielle King. One graduate, Madalyn Wells, relocated to South Dakota because of her husband’s job, but thanks to the ability to complete her certification requirements via Zoom meetings, was able to perform her student-teaching duties in a South Dakota school district.

Molly Taylor, clinical director of the Education department, noted that December-graduating student teachers normally spend their springs serving as classroom substitutes, but many are getting jobs immediately because of a nationwide teacher shortage.

Two graduates – Olivia Zacharias and Sydney Kirkham – were each awarded $500 TEACH Scholarships to assist in completing their student-teaching journeys next year.