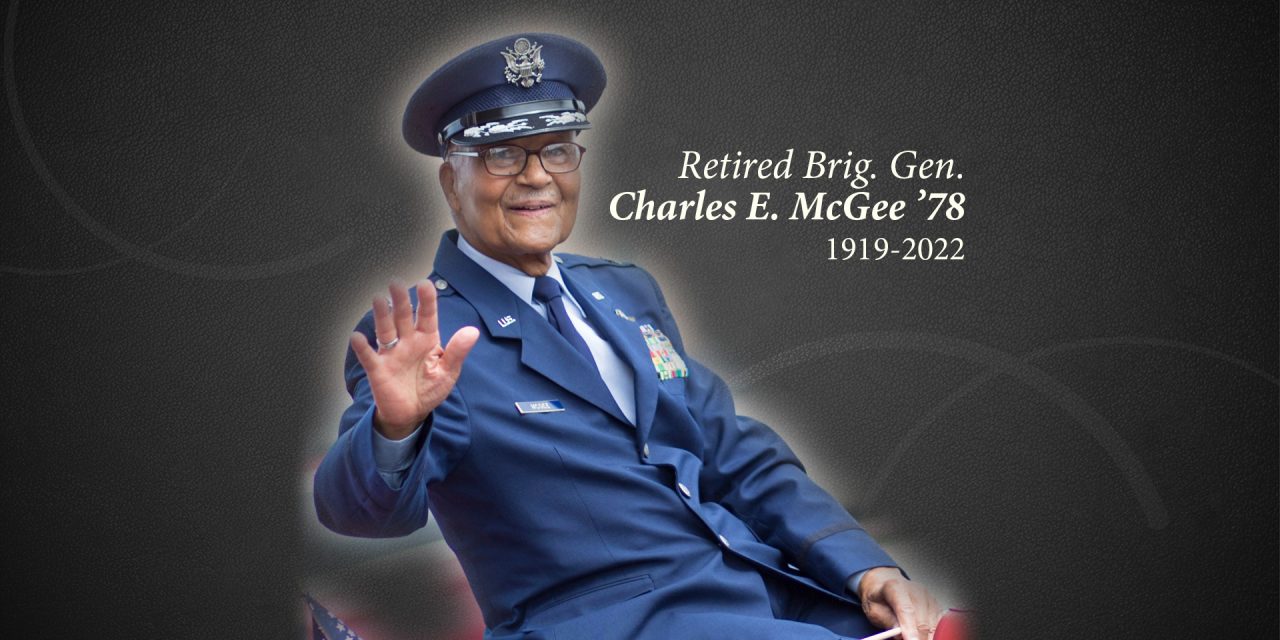 One of Columbia College’s greatest alumni and a true national treasure, retired Air Force Brig. Gen. Charles E. McGee, passed away peacefully Sunday at the age of 102 at his home in Maryland. He lived a life of dedicated service to the U.S. Air Force, the Boy Scouts and the Alpha Phi Alpha fraternity among many other organizations. We are proud to call him one of our own.

Gen. McGee’s service to his country began long before joining the Army Air Corps in 1942. He grew up as a Boy Scout and earned the rank of Eagle Scout. Once enlisted, he was sent to the training program at Tuskegee Army Airfield to join the first African American military aviators who would become the famed Tuskegee Airmen.

He became a command pilot with over 6,000 total flight hours. At the time of his retirement, McGee held the Air Force’s records for most combat missions (409) and combat hours (1,151) flown. He flew fighter aircraft combat tours during World War II as well as the Korean and Vietnam Wars.

He went on to command the 44th Fighter Bomber Squadron in the Philippines from 1951-53, the 7230th Support Squadron in Italy from 1961-63, and the 16th Training Squadron from 1967-68. McGee’s last post was as commander of the now-defunct Richards-Gebaur Air Reserve Base in Kansas City. The assignment made him the first black commander of a stateside Air Force Wing.

By the time of his retirement from the Air Force in 1973, McGee had earned numerous awards for his service and valor, including the Legion of Merit with Oak Leaf Cluster, Distinguished Flying Cross with two clusters, Bronze Star, Air Medal with 25 clusters, Army Commendation Medal, Air Force Commendation Medal with cluster, Presidential Unit Citation, Korean Presidential Unit Citation, the Hellenic Republic WWII Commemorative Medal, the French Legion of Honor, and several campaign and service ribbons.

He later served as director of the downtown Wheeler Airport in Kansas City. It was there that he chose to return to college. He earned his bachelor’s degree from Columbia College-Kansas City in 1978.

Gen. McGee’s honors continued to accumulate well past his retirement. Former President George W. Bush presented him with the Congressional Gold Medal in 2007, and in 2011, he was inducted into the National Aviation Hall of Fame.

In December 2014, Columbia College honored McGee by conferring a Doctor of Humane Letters degree. It was the first time in nearly 30 years that the college awarded an honorary degree, given to an extraordinary individual who demonstrates the values the college champions in its mission and goals.

In the fall of 2019, the college announced that the Ousley Family Veterans Service Center would move to a new home in 2020 to enhance the student experience for its military and veteran community. That facility, located at 904 N. Eighth Street, is now known as the Brig. Gen. Charles E. McGee ’78 House.

That December, McGee was given an honorary promotion from colonel to brigadier general. Former President Trump pinned his stars in the Oval Office on February 4, 2020, and he was a special guest at the State of the Union address later that evening.

Two days earlier, Gen. McGee was part of the ceremonial coin toss prior to Super Bowl LIV in Miami, alongside three fellow 100-year old World War II veterans. McGee then witnessed his second-home Kansas City Chiefs win the Lombardi Trophy over the San Francisco 49ers. Gen. McGee’s long-standing commitment to the Boy Scouts was also recognized in 2020 as the National Capital Area Council of the organization created a special edition council shoulder patch in his honor.

Finally, this past June, the general aviation terminal at Wheeler Airport, where he’d previously served as its director, was named in his honor. In addition to honoring his military service, the Federal Aviation Administration honored McGee by naming three sequential navigation waypoints – Tuskegee, Airman, and McGee – around Kansas City International Airport so that McGee’s name would be spoken by pilots for years to come.

McGee’s commitment to education lives on in the Brig. Gen. Charles E. McGee Scholarship, which he established in 2009 to help qualified veteran students achieve their education goals. Each year, the award recognizes the efforts of veteran students who embody the spirit and courage of Gen. McGee in his or her service and pursuit of education. Click here to learn more.