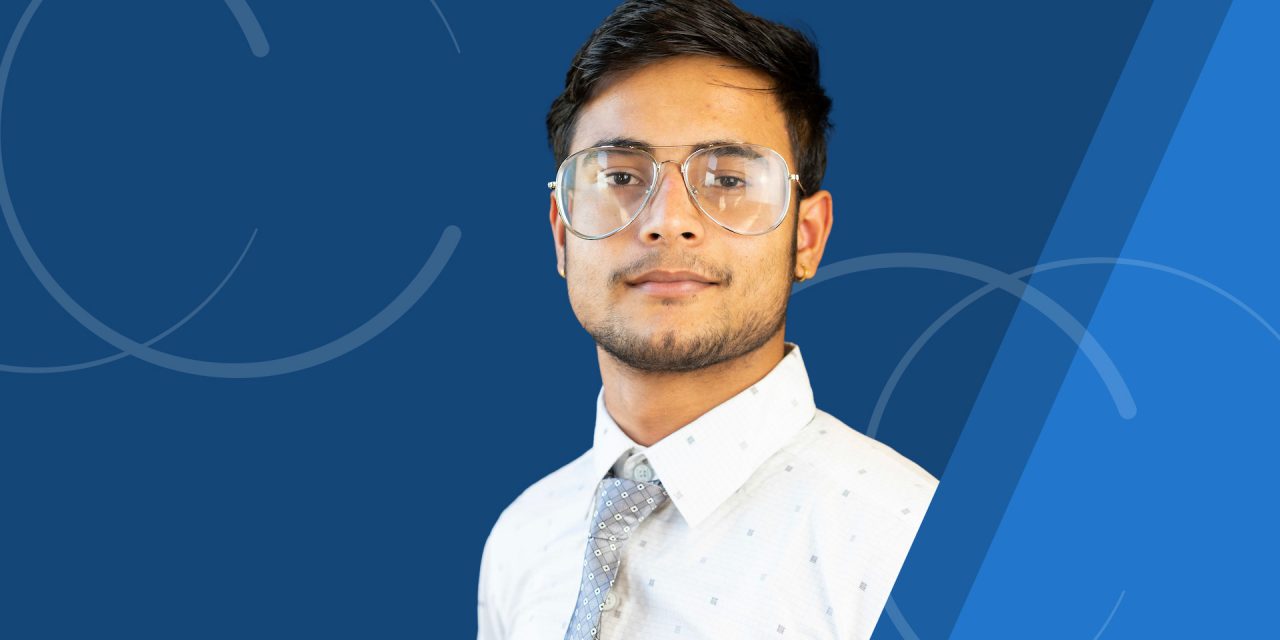 Being a college student is a hard-enough task. For most, there’s an adjustment to a new community and meeting new people – as well as enduring a harder curriculum than high school.

Saurav Bhattarai has navigated all those obstacles while speaking a completely different language and integrating himself into a culture much different from the one he grew up with.

Not only has done all that, he’s thrived, and even before graduating from Columbia College later this spring, he learned that he has secured entry into Google’s Early Career Software Engineering Program and will work in its Google Ads unit beginning in June. He’s just the latest of a string of successful computer science grads earning programming jobs at top-notch employers.

The news is not a surprise for Associate Professor of Computer Science Dr. Yihsiang Liow, who considers Bhattarai one of his strongest students. Liow notes that in 2019, Google received three million job applications and had an acceptance rate of 0.2%. “It’s easier to get into Harvard than to get into Google,” says Liow, who has now had three students hired by Google.

Bhattarai grew up in Biratnagar, Nepal, the country’s second-largest city of nearly 250,000 people. In order to better his educational opportunities, he moved in with his older brother in the capital city of Kathmandu to complete his final two years of schooling. He dreamed of studying abroad to go to college, but knew there was no way that could happen without a scholarship. Fortunately, a former student from that school in Kathmandu had paved that very path.

It was there that he met a student by the name of Bibek Poudel, who had returned home during a break in his studies at Columbia College. Poudel had earned a Presidential Scholarship to CC, was double-majoring in computer science and mathematics, and encouraged Bhattarai to apply. “He was so kind to help me with learning more about Columbia College,” Bhattarai said.

Bhattarai feverishly started working on improving his English skills once he moved to Kathmandu, but as with many languages, learned that there’s a difference between formal and conversational English. “My writing was very poor and my speaking was abysmal, but I knew I had to get better, so I started hanging out with tourists at the temples in Kathmandu. That’s really how I learned to speak English.

“It’s hard enough that there are 10 different ways to say something in English,” Bhattarai says with a grin. “I could communicate, but I wasn’t as funny as I’d like to be.”

He continued to improve, and when it was time to apply for the Presidential Scholarship at Columbia College, he was ready. Liow was one of his interviewers at Scholarship Day, and knew he would be successful. “Saurav is a fast learner and quick thinker,” Liow says.

For his part, Bhattarai credits everyone who has helped him get to this point: Dr. Liow, Poudel, various staff members in Admissions, International Student Services and Career Services, his colleagues in student government and fellow international students he’s met on campus. “I’m really grateful for the international community we have at Columbia College. Everyone has been really supportive, and they’ve made me feel like home. I’ve been in good hands.”

He is especially complimentary of CC’s Computer Science department, and puts it up against any in the region, including the much larger one in Columbia. “The CS program at Columbia College is hugely underrated. We have one of the top computer science programs in the Midwest. To have such a small group of students and still have a shot at the world’s top software companies – Google, Amazon, AT&T and lots of other industry-leading companies – is a huge deal.”