Hearn ’19 is she that braves the page 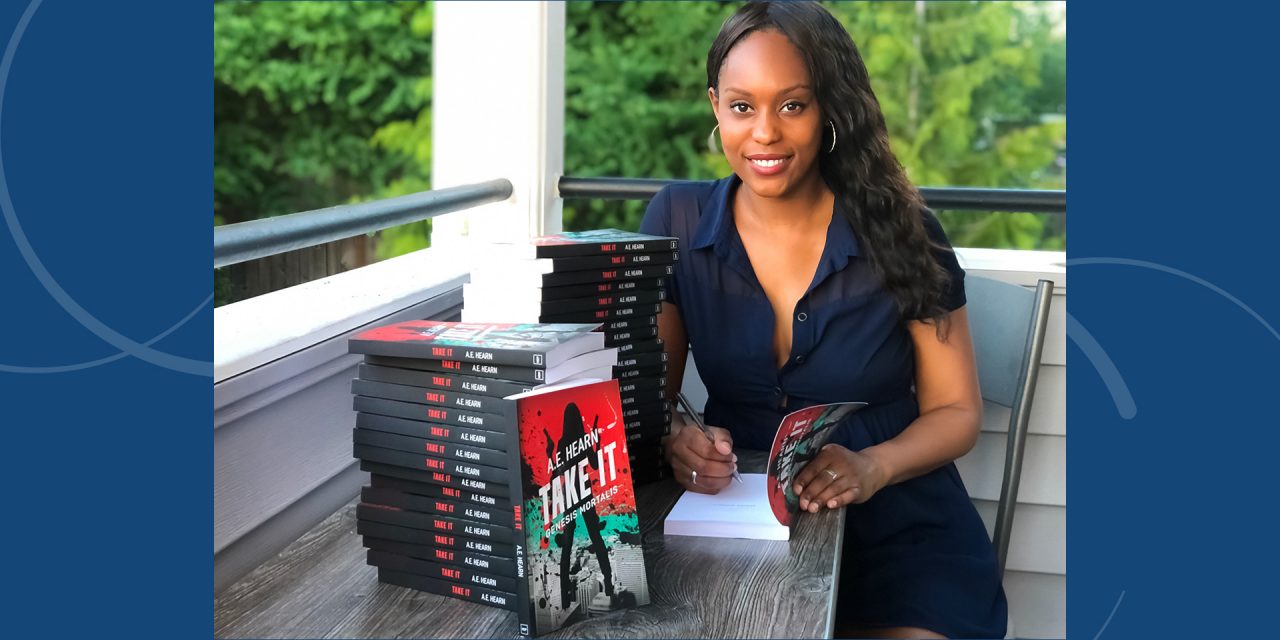 It takes a lot to keep up with Ashlea Hearn ’19 when you ask her the common question: “So, what do you do?”

There are multiple ways to catalog Hearn’s response. You can start chronologically from when she began. Or you can list her project based on which of her current endeavors take the most time each week. Perhaps it makes sense to start with the place where Hearn is currently receiving the most recognition.

Hearn is using her communication degree to work as a marketer for a law firm in Seattle. She’s also a lieutenant in the Army Reserves where she has served eight years. And, most recently, she is a newly published author of young adult fiction.

Hearn graduated from Columbia College’s Day Program with a major in communications and minors in English, film studies and military science. She always had dreams of living on the West Coast, so when she graduated, she headed to Seattle where she could appease her parents by being near some family (she has an aunt and uncle who live there, giving her some of the stability a family brings), but still move to a new and exciting place.

The West Coast seemed like a good place to be, in part, because at one point Hearn toyed with the idea of her story on the big screen.

“Technically I knew I had enough for a book when I was in high school,” Hearn says. “I had a good idea in middle school and formed the ideas in high school with a very rough draft.”

In and around all the other things Hearn did in high school, she found the process of novel-writing to be challenging and wondered if she might, instead, want to tell the story in film. So, college was about taking her idea and drafting a screenplay.

Hearn took both writing and film classes in college and realized that though she loved the idea of a screenplay, “Breaking into Hollywood is hard,” Hearn says sheepishly. “It’s much harder than trying to publish a book. So, I took the film scripts and converted them to novels.”

“When I think of students like Ashlea, I don’t think ‘good’; I think ‘excellent,’” says Christina Ingoglia, associate professor in English. “I also think about how lucky I am to have spent as much time with her – both teaching Ashlea and learning from her, too!”

Ingoglia had Hearn in classes that included creative writing, fiction writing, creative nonfiction writing and food writing. She remembers Hearn as “a hard worker, a renaissance person, who is fun, stylish and kind.”

“She is really great at writing action and adventure scenes – whether we looked at parts of her novel or whether she was describing an incident from her military training,” Ingoglia says. “Another exciting piece of Ashlea’s writing is how she creates strong female lead characters who decide their own fates.”

After working on her books throughout her college career, Hearn finished drafts of her first and second novels in January of 2020.

Hearn describes herself as “She that braves the page.” But braving the page was just the first step. Hearn had accomplished that, taking her idea and crafting it in multiple forms over years. The next steps would be just as challenging. Now that she had a book, she needed to get it published. And she needed to learn a lot about how that process worked and what would work best for her.

Part of what made Hearn successful was her ability to find leads, discover the next steps and push forward. She said she learned how to do that as part of current job.

“When I started my job at the firm, I wasn’t too outgoing,” Hearn explains. “I was doing these marketing drops, meeting with chiropractors and physical therapists. It was terrifying, but I threw myself out there.”

That skill – the bravery to put yourself out there – to cold call – is what helped Hearn as she used networking skills to advance her career as an author.

Then, one of Ashlea’s close college friends, Yulia Bychkovska ’21, came across a notice about the Creator Institute for aspiring authors. She sent it to Hearn.

Hearn, following the lead, contacted Eric Koester, a Georgetown University professor and founder of the Creator Institute. Koester also serves on an advisory board for a hybrid book publisher, New Degree Press. He introduced her to a publishing process halfway between self-publishing and contracting with a publishing company.

While this hybrid book publisher would provide many of the resources of a traditional publisher (think editor, cover art assistance, etc.), what it didn’t provide was all the funding to get published. Hearn had to fundraise $6,000 in just 30 days to make certain her book could be published.

“As I was researching self-publishing and hybrid publishing, I came across a woman named Anna David,” Hearn explains. “She has her own publishing company. She has a podcast and talks about the reality of publishing.”

So, Hearn and David did as everyone began to do during the pandemic – they jumped on a Zoom call where Hearn told David about her ongoing publishing journey.

David, a New York Times best-selling author and TEDx speaker, became Hearn’s mentor. She’s even hosted a podcast with Hearn as her guest.

Hearn released her first novel, Take It: Genesis Mortalis, in 2021 under the pen name A.E. Hearn. Although Hearn has met a lot of people in her author journey, she recently met someone who stands out to her more than any other.

“I met this young girl at my first-ever book signing at Barnes & Noble,” Hearn says beaming. “She’s 12 years old and so charming. She asked about wanting to be a writer. It made me so emotional. She is why I’m doing this. I want to inspire other little girls to be authors and writers too.”

What’s Ahead in the Trilogy

Hearn isn’t finished on her writing journey. She is currently working on a second book – part two of a trilogy. In true writer fashion, she quantifies the work to be done by word count, stating she has “about 10,000 words to really do the story justice.” Hearn hopes to publish her next book by the end of 2022.