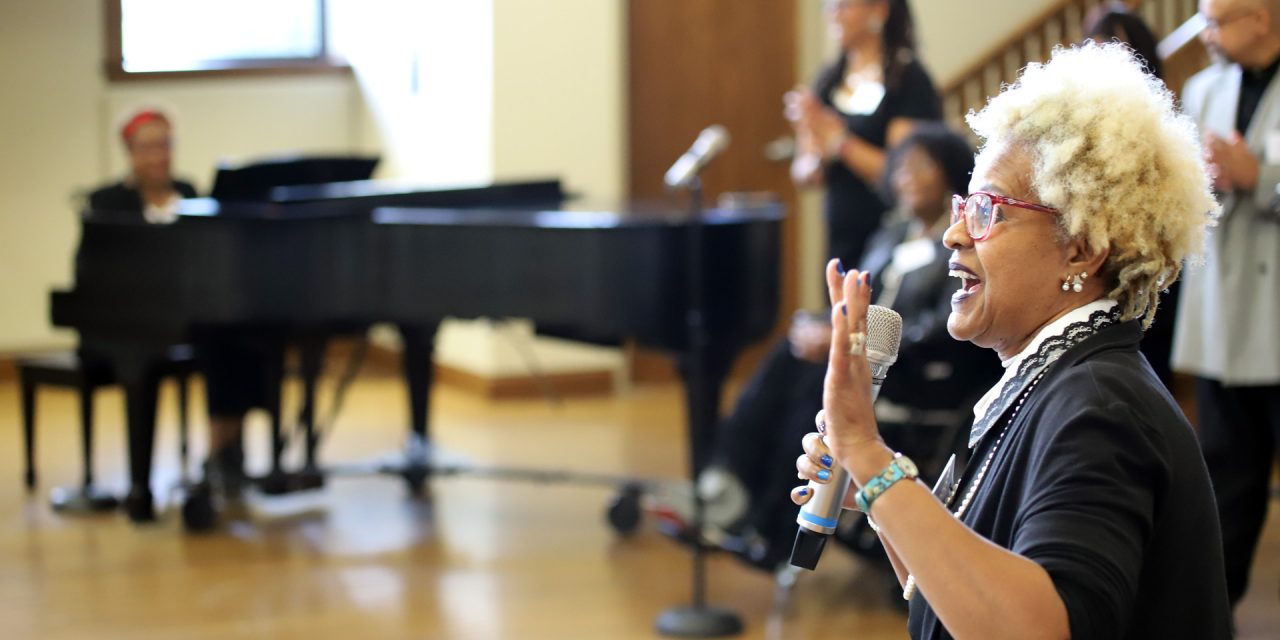 Children of God members come together for a 50-year reunion and give back to the place that helped lay the foundation for their success.

On a Thursday night in October, more than a dozen African American alumni of Columbia College gathered in a hotel lobby near campus to reminisce. Many of them were part of the first cohorts of Black students to attend the school in the early 1970s. Some hadn’t seen each other in person in nearly 50 years but, as they shared hugs, laughs and stories, the intervening decades just seemed to melt away.

“We’ve all grown, and none of us have changed,” says Terry Lane ’73, who attended the reunion with his wife, Carol Allen Lane ’75.

Friends traveled from all over the country – as far away as New York and California, as close as Jefferson City – to gather in Columbia for Homecoming weekend Oct. 15-16, 2021, the first time many had been on campus since their college days.

It was a unique opportunity to come together and celebrate the 50th anniversary of the founding of the “Children of God,” a gospel choir started by 13 African American students at Columbia College in the fall of 1971. Over the next few years, the group made a name for itself performing at area churches, eventually expanding in membership to more than 30 and singing for audiences as far away as Chicago.

But Children of God was about more than performing. For some of the first African American students at Columbia College, it served as an invaluable social support system, a network of students who could rely on each other for their emotional, mental, academic and moral needs.

At a turbulent time in the nation’s history, during a period of transition at Columbia College, they were there for each other. And they continue to be.

“We were brought together unexpectedly for a purpose. We were brought together by the grace of God,” says Bill Seibert ’09, who started at Columbia College in the ’70s and came back to finish his degree four decades later. “I don’t think any of us have forgotten that or take that for granted. We put that in the forefront that we are meant to be together. There is a purpose for us to be together.”

Ellen Miller-Mapp ’75 felt a dizzying mix of emotions when she first set foot on Columbia College’s campus as a freshman in 1971.

She was nearly 500 miles from her home in Cincinnati, Ohio. She was excited to begin her studies in fashion and illustration in a small-college environment, but she was in a part of the country she knew next to nothing about and entering a situation in which she did not expect to see many – if any – faces that looked like hers.

She would soon find out that she wasn’t alone.

“There were 13 (Black students) on campus, all of us coming on campus just terrified, not knowing what to expect and thinking we were the only one. Imagine that,” Miller says. “During registration, we kind of got glimpses of each other and thought, ‘Good, I’m not the only one.’”

Nationally, tensions simmered – and sometimes boiled over – concerning the Vietnam War and the Civil Rights movement. Locally, Columbia College had recently welcomed its first male students to campus, changed its name from Christian College in 1970 and was in the midst of its first concerted effort to recruit African American students to the school under the leadership of President W. Merle Hill.

At the time, Miller and her fellow students didn’t necessarily want to be trailblazers. They just wanted to get a good education.

“The emphasis was not on the fact that we were integrating the school,” says Angela Montgomery Timmons ’74. “The emphasis for all of us was to do well, get a good GPA, get on the Dean’s List. We did not think of it in terms of establishing or making history.”

Nervous and overwhelmed on that first day in 1971, Miller stopped in at Dulany Hall for some lunch. The first thing she noticed were the white linen cloths on the tables.

The second thing she noticed was the grand piano, and Timmons perched on its bench.

“That was her safe zone,” Miller says. “There she was, playing the piano in all that craziness, with everybody buzzing around, playing gospel music like I knew from church. And it felt like home.”

Miller set down her plate and walked over to introduce herself to Timmons. Soon, a handful of other Black students joined, singing gospel music to Timmons’ accompaniment and getting to know each other.

“We weren’t Children of God then, but we were literally children of God needing each other,” Miller says. “As more came in, the familiarity of what felt like home made the day and the experience feel so much better. We got to know each other just a little bit, and that got us started.”

In its first official performance, Children of God served as backing vocalists for member Peggy Bland- Seltzer ’73 as she recited poetry at a talent show.

Seibert remembers being a Children of God fan before he officially joined the choir. He came to Columbia College from Rolla on a partial drama scholarship in 1972 and would hang around and listen to them rehearse. One day, as they met in Dulany Hall, they asked if he could sing.

“I said, ‘a little bit,’” Seibert says. “They had this song that repeated itself, and all of us who weren’t in the choir had a verse where we sang. They said, ‘Oh yeah, we want you.’ It just kind of pulled you in. They were such a fun and loving group. Even before even being in the choir, I wanted to be around them and hear them.”

Children of God would perform on campus and as the guest choir at area churches. Timmons served as the group’s first director, with Leon Kendrick ’77 following her.

Soon, the group became so in demand that it had to start keeping organized performance calendars to track where they all needed to be each Sunday. Seibert remembers one time, in particular, when Channel 17 asked the group to perform on the air.

“My family in Rolla got to watch me sing. I had a solo,” Seibert says. “That tells you how well-known the group was. The whole time I was with the choir, I don’t think I missed a performance. I really looked forward to doing it. They were a lot of fun, and it was a lot to be proud of.”

And, while the group was making its mark through gospel music, its members were also leaving an impact on campus.

Miller was the school’s first senior class president. Terry Lane served as the first African American president of the student body. While Lane didn’t perform with the group, he was very close with its members.

“They were an inspiration,” Lane says. “They impacted, in such a subtle way, all of us. They were the core of our African American experience group. Being the first African American student body president was something I was absolutely aware of, but I didn’t put value on it or understand the impact of it until long after I was gone. It doesn’t hit you, for example, until you go back for your 50th anniversary and realize what that really said.”

“We’re going to keep in touch now and keep up with each other. We’re slowly starting to make plans for another reunion,” Seibert says. “We definitely can’t wait 50 years. Maybe not even five. We’re talking about maybe two years to try to get back together again, enjoy each other’s company and do something.

For the first time in nearly 50 years, Children of God gathered for a gospel performance. This one took place in Dorsey Gym on Oct. 15, 2021, and consisted of three songs, including its signature piece, “Oh Happy Day.”

After, the members took part in a question-and-answer session about their experiences as some of the first African American students at Columbia College.

The Children of God reunion was a weekend to celebrate the vision of President Hill to help bring these students together — the lifelong connections they made during the time on campus and the successes each of them reached after Columbia College.

During the reunion performance, the Children of God presented a check for nearly $9,000 to establish the award.

“What better way for a student to know that they can be successful than to know that we were there and we were successful?” Miller says. “There is nothing better than to be able to reach back and help a person in much the same way that we were guided and supported when we were there. We wanted to be that support that helps a student through the little things that come up. They can drive you crazy enough that you can give up. Well, we don’t want them to give up. We want them to stay and get their degrees, and we want them to know it’s coming from us.”

The initial award is in memory of H. Keith Holliday ’74 and in honor of Angela Montgomery Timmons ’74 (inset with Miller), who helped get the group started by giving her classmates a sense of home in the middle of Dulany Hall on that day in 1971.

“Words cannot convey what this group means to me,” Timmons says. “That foundation laid the way and launched us into our careers. All in all, if we were to define success, it would start here.”

In addition to the scholarship fund, Miller says she and her classmates plan to stay involved with Columbia College, working with President Dr. David Russell and administration on diversity initiatives. Through these efforts, the Children of God hope to see their legacy live on.

To learn more or make a gift, visit my.ccis.edu/aalegacyaward.

The reunion was more than a year in the making, from the time the group members first started reconnecting on Zoom through zeroing in on homecoming weekend for the event and planning it with the help of former Director of Alumni Development Keith McIver and other Columbia College Advancement staff members.

“The vibe and energy in that room was palpable,” Timmons says. “It was an amazing weekend for all of us. We all came away knowing that it was just what we ordered. The entire weekend, we were all floating.”

“This is a very special group. I’ve never been involved with anything like this, where we can come back together, have a lot of fun but also be serious when the time comes. This is our legacy. We have not forgotten where we come from.”