Made for this moment 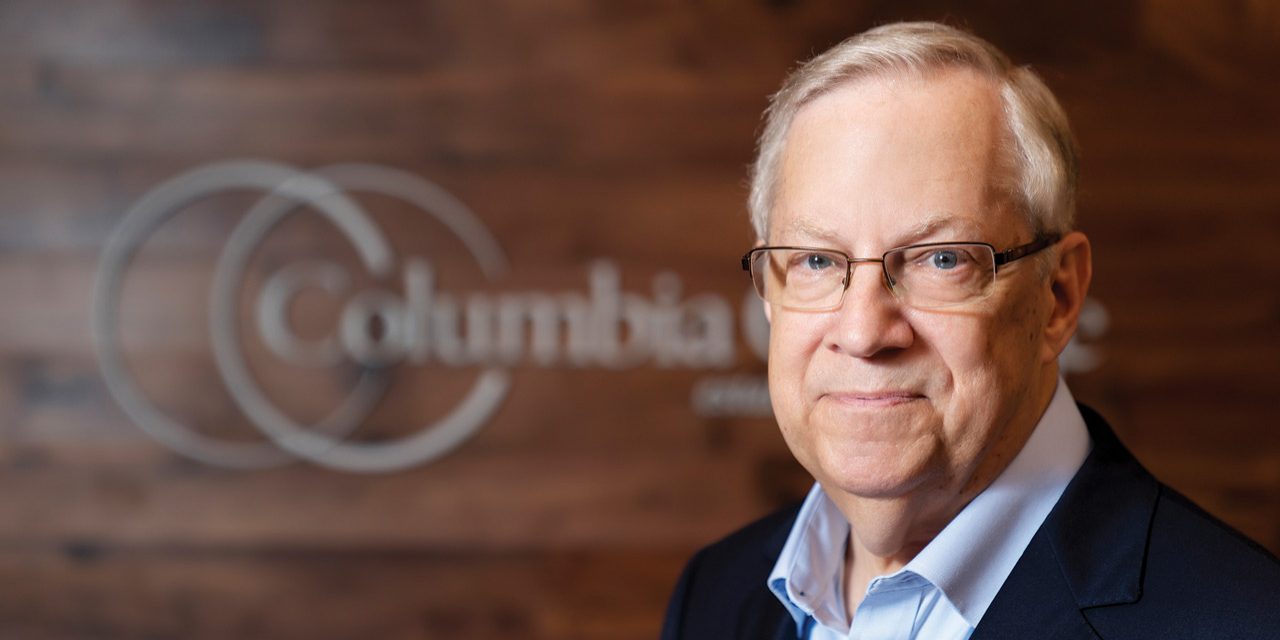 Nine years ago, David Russell and Lee Terry were each content with living their lives as independent widower and widow. He had a successful career in higher-education administration; she was CEO of the Columbia Board of Realtors and on the board of True North, a nonprofit agency that serves survivors of domestic violence. Yet longtime Columbia realtor Betty Tice was insistent that her mutual friends get together for a date. David flat-out turned down Betty’s invitation for the three of them to have dinner twice before finally agreeing to the quasi-blind date.

Several books, movies and military stories later, Betty got bored, decided she’d done her part, and left. Lee and David stayed, spending 2½ hours talking, drinking nothing but water, and being anything but bored. It was the beginning of a wonderful love story that indirectly brought Columbia College its new president and first lady.

Checking all the boxes

Dr. Russell remembers first becoming significantly aware of Columbia College when then-University of Missouri Provost Dr. Gerald Brouder was named president of CC. “I stood up and took notice when he moved from the big state U to a small independent college,” Russell says. During the next few years Russell enjoyed a good working relationship with Brouder during his tenure as state commissioner of higher education.

While he was president, Brouder was a member of the council of presidents that provided the state commissioner with valuable advice and feedback. Because of that, Brouder was asked by the state’s independent colleges to be their representative in Jefferson City. “He always did a terrific job, of course,” Russell says. “I admired his demeanor and the way he was always prepared and knew what he was talking about.”

The Rev. Dr. Brad Stagg has served as senior minister pastor of First Christian Church in Columbia since 2012, and because of the church’s covenantal relationship with Columbia College, joined the Board of Trustees later that year. As he became more familiar with the college, he recalls the president giving him a simple, yet profound piece of advice for being a good trustee: “Your job is to ask questions,” Brouder said.

The first time Stagg met David Russell was at the latter’s first board meeting in 2016. His first impression was that the former Army officer and higher-education administrator was insightful. “He asked questions that many of us in the room should have been asking, but he did so in a humble way,” Stagg says.

It shouldn’t come as a surprise that David Russell checks all of the boxes the board seeks in its leader:

When the college’s previous president
announced his departure from the college in November 2020, Russell, as sitting chair of the Board of Trustees, was named acting president, in accordance with board bylaws designed to provide continuity of leadership. While Russell was getting accustomed to the day-to-day workings of the college, the board’s immediate focus was on selecting someone to serve on a more-intermediate basis as interim president. “I thought I would do the job for about a month,” Russell says.

As Stagg remembers, the board didn’t spend a long time discussing options. “We were thinking, this man’s been the commissioner of higher education for the entire state, the chief of staff for the UM System. He can do the interim job,” he says.

For both Russell and the board, one of the appealing facets of the decision to appoint him as interim president was the agreement that he would not be a candidate for the permanent position. That way, he could focus on running the college, and the board could focus on the process of selecting a permanent replacement. And with the board chair role now officially empty, Vice Chair Stagg became acting chair of the board, as well as the one initially tasked with leading the presidential search.

The plan was relatively straightforward, if not necessarily easy: deliberate as a board about the qualities needed in a new leader, engage various entities within and outside the college for their feedback and solicit a search firm to assist in vetting and recruiting potential candidates – a process expected to take anywhere from 12 to 18 months.

As a matter of course, Russell, Stagg and Dale Coe Simons ’65 – who was appointed vice chair following Russell’s appointment – began meeting via Zoom each Monday. “Those chats just built so much trust and a collegial atmosphere; David is so good at creating a collegial partnership,” Stagg says.

Stagg tasked fellow trustee June Viner Hurdle ’83 with chairing the search committee, and as the calendar slowly moved to mid-summer, one of the first items of business for that group was to hire a search firm to assist with the process.

Yet just before that happened, the process hit a fortuitous bump, which Stagg vividly recalls happening as he was sitting in the breakfast area of a motel in Muskogee, Oklahoma, while he and his family were on vacation. “Some of the trustees called me after that vote,” Stagg says, “and they asked me, ‘Before we sign on the dotted line (with the search firm), should we consider if we already have the person?’” Stagg loved the idea personally, yet he had two problems. He remained circumspect.

First, Stagg knew he and the board had a duty to the college to honor the search process. Second, he was under the impression that Russell’s time with the college had a defined end. As Lee Russell made clear to Stagg at the outset, “You can have him for 18 months, not 19,” he laughs in recollection. For that part of the conundrum, he reached out directly to the source. To be clear, the first call was to Lee.

There were some logistical challenges – she had already planned, and paid for, specific vacations, and those were non-negotiable – yet those were just details. “The idea behind the 18 months was that when you’re retired, you want your spouse with you,” Lee recalls. Ultimately, she came to a different conclusion. “When you’re retired, you’re supposed to do what you love in retirement. And he loves (serving as president). So how could you not say yes to doing what you love?”

From that point forward, conversations between board members and Russell exclusively involved operational issues for the college. The need to avoid the slightest perception of favoritism was such that the weekly Zoom sessions among Russell, Stagg and Simons nearly ceased from June through August.

During that time, Stagg went into high gear to visit with every possible constituency at the college, covering both ends of Tenth Street – First Christian Church is just three blocks south of Rogers Gate – and via Zoom. From faculty representatives on the Board of Trustees to the entire Faculty Association, from the college’s administrative Management Council to the Staff Association Advisory Council, from the CCAA to the provost and dean of students, from the college’s Diversity, Equity and Inclusion Committee to the Robert W. Plaster School of Business Advisory Board, Stagg held no fewer than 15 meetings spanning the spectrum of the college community. Other college leaders also canvassed various community leaders on Stagg’s behalf.

The feedback from those listening sessions was overwhelmingly positive that David Russell was the perfect person for the job. On Friday, September 24, the Board of Trustees voted unanimously: Effective October 1, 2021, he would become Columbia College’s 18th president.

So now that Russell has emerged from several firsts in his time in office – holding a State of the College address to staff and faculty; hosting Veterans Week, Holiday Lighting and Alumni receptions; not to mention several commencement ceremonies – what is on the docket in the near term?

Item No. 1 is adopting a new strategic plan that, while ultimately for the Board of Trustees, will function annually as a rolling five-year roadmap for the college. “I love the idea of planned chaos,” Russell says, “challenging everything that we do, testing to see if it’s really right or if it needs to be changed.”

A second focus is revitalizing enrollment management processes and updating the process of attracting prospective students through the college’s doors, particularly in Columbia College Global.

Russell also expressed the need to review and strengthen the college’s customer-service processes for students expressing an interest in CC. “I’d love to get to the point where we have no competition in that area, that we’re the best there is,” he says. “And if we are, we’re going to have success.”

He also stressed that the college must work on its efforts to serve underrepresented populations. In the fall of 2021, the college established an Office of Diversity, Equity and Inclusion and hired its new director, Alejandra Gudiño, in January 2022.

For her part, Lee has jumped headfirst into her role as first lady. An alumna and avid Auburn Tigers fan, she has seen the success of AU’s mascot, Aubie, and has played an active part in increasing Scooter the Cougar’s visibility around Columbia College and the nation. Until very recently, Lee served on the City of Columbia Planning and Zoning Commission and continues to be actively involved as past president of the Board of Directors for True North.

“I want to create an attitude on the part of all people associated with the college that says, ‘I am personally responsible for promoting Columbia College, reaching out and bringing in bright, young students to study here,’” Russell says. “That means enlisting alumni and friends of the college like never before.”

As part of getting to know various constituencies during his time as interim president, Russell marveled at the CCAA Advisory Council. “I was so impressed with that group. They were all leaning forward in their seats, asking what they could do to help.”

Together with college leadership, the Russells began conceptualizing a place – for now, “Ivy Place” is the working name for it – that can serve as a welcoming point for visitors to the main campus in Columbia. Visitors include alumni who graduated from the earlier days of Christian College, those who are seeing campus for the first time after studying online or at a nationwide location, as well as new students coming in the door who are just beginning their experience with Columbia College.

He also stressed the importance of professional development for staff and formally recognized the role of faculty. “I don’t think faculty get enough credit for what they do, and I want to create an atmosphere that causes faculty to want to come here to teach, and also makes them want to stay here because they can’t imagine a better place to work.”

As the daughter of a U.S. Air Force officer, Lee Russell self-identifies as a “military brat,” moving not only over every part of the United States, but also to the Middle East, Japan and several islands in the Pacific.

She married Jay Terry, a Vietnam War veteran who was a Top Gun for the Air Force. His numerous assignments meant more moves for accompanied and unaccompanied duty tours. After his retirement, they moved to Columbia in 1987. Jay passed away in 2002 from the effects of being exposed to Agent Orange during his service in Vietnam.

Lee’s experiences taught her how challenging military life can be for families. The frequent moves can uproot children from their schools, put a strain on friendships and disrupt efforts by spouses to complete their degrees and establish their own careers. “I wanted to do something to help struggling spouses who needed financial support in order to finish their degrees, get a good job and start a career,” she says.

The result is the Lee Terry Russell Military Spouse Scholarship, which will be awarded annually to a Columbia College student who is married to a member of the military community, either currently serving or a veteran. “We must not forget those who quietly serve their country in support of our military,” she says. “They, too, sacrifice much, and they are deserving of our support. I hope this scholarship and perhaps others like it will give them more options.”