Each year as the calendar turns to March, the Columbia College community comes together to celebrate Women’s History Month.

This year’s theme was “Ceiling Breakers: Women in Activism” and included a pair of outstanding discussions. On March 9 via Zoom, Organization of American Historians Distinguished Lecturer Dr. Danielle L. McGuire delivered a virtual keynote entitled “Rosa Parks, The Radical.” While Parks is historically remembered for her role in the Montgomery bus boycott, McGuire provided a deeper look into Parks’ extraordinary life and the impact she made on the world. 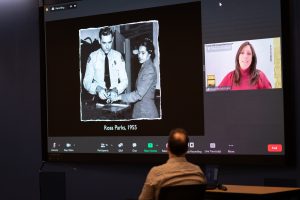 Rosa Parks is certainly one of the nation’s most recognizable historical figures. On Dec. 1, 1955, Parks refused to vacate her bus seat for a white passenger, sparking a major moment in the Montgomery bus boycott in Alabama. Recognized as “The First Lady of Civil Rights,” she spent her entire life as a pivotal figure in the Black Power movement.

McGuire’s fascination and respect for Parks grew while attending graduate school, as she tuned in to a National Public Radio (NPR) broadcast discussing the civil rights movement. During interviews with numerous veterans of the movement, Parks’ name was frequently mentioned. McGuire personally wanted to dig deeper into the famous Montgomery bus boycott and during that research, she quickly realized how far Parks’ impact stretched within society.

With the fight for equality and inclusion ongoing today, McGuire urged her audience to get involved and listen to what’s happening around them.

“Open the paper and read the news every day,” said McGuire. “We’re still seeing many cases that are violating basic rights. Get involved with local causes to help bring awareness and make a change. Similar to Rosa Parks, know that change takes time. Be patient.” 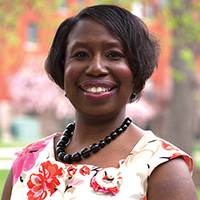 With the theme of “Ceiling Breakers: Women in Activism” in mind, the college assembled an esteemed panel to discuss the topic at hand. Following introductions by Lirley, Russell, Foxworthy and McLeod shared their personal journeys and what led them to becoming powerful voices in the ongoing movement.

Foxworthy, a Navy combat veteran of more than 20 years, continually broke barriers in the U.S. military during her tenure. Four years into her career with the Navy, Foxworthy became the first African American female in more than five years to complete the elite Naval Aircrew Candidate training program. Over the next 16 years, she became the first African American aircrewman in the enlisted ranks and the first female in-flight technician during her squadron tours.

“Once I started reporting to my first, second and third aviation squadrons, I realized I was the first to do so with my gender and skin color,” said Foxworthy. “It blew my mind. I never sought out to be the first. Now, I see my purpose as I paved the way for other Black and brown women coming behind me. Somebody had to be the first. I want to use my voice to help others find theirs.”

McLeod spent 25 years as the Daniel Boone Library regional manager in Columbia, Missouri, and was recently named the president of the League of Women Voters of Missouri. In her role, McLeod aims to increase accessibility to voting for women and ensure a fair and transparent redistricting process.

Established more than 100 years ago, the League of Women Voters of Missouri continues the battle to ensure equality. McLeod stressed to the attendees of the panel to never quit the fight and make sure their voice is heard by the appropriate politicians.

Russell closed the evening’s discussion expanding on McLeod’s plea to women locally and globally to vote. She reminded the audience that voting rights are in continuous danger, and all women must be aware of what’s happening in society.

“Right now, there’s such an erosion of women’s rights. You see it on the news every day, and it’s scary,” said Russell. “Fair pay wage is also a topic. Women make 83 cents on the dollar compared to men. 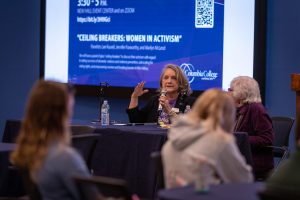 Things like childcare and birth control are still perceived as a women’s responsibility. We must change that mindset. I challenge everyone to pay attention, get out there and do something about it.”

The common theme among all three panelists throughout the night was to remind women of the power of their voice and how using it can lead to actual and meaningful change. Russell emphasized to the group that old-fashioned pen and paper can still move the needle in a positive direction.

“The rights that women earned in the 1960’s and 1970’s are slowly being taken away from us,” said Russell. “When you find major issues like this in society, sit down and write real letters to your respective legislators. They will respond when they get an overwhelming amount of information because they know that’s their constituency and their votes. Women are an enormous voting block, and we truly can make things change.”