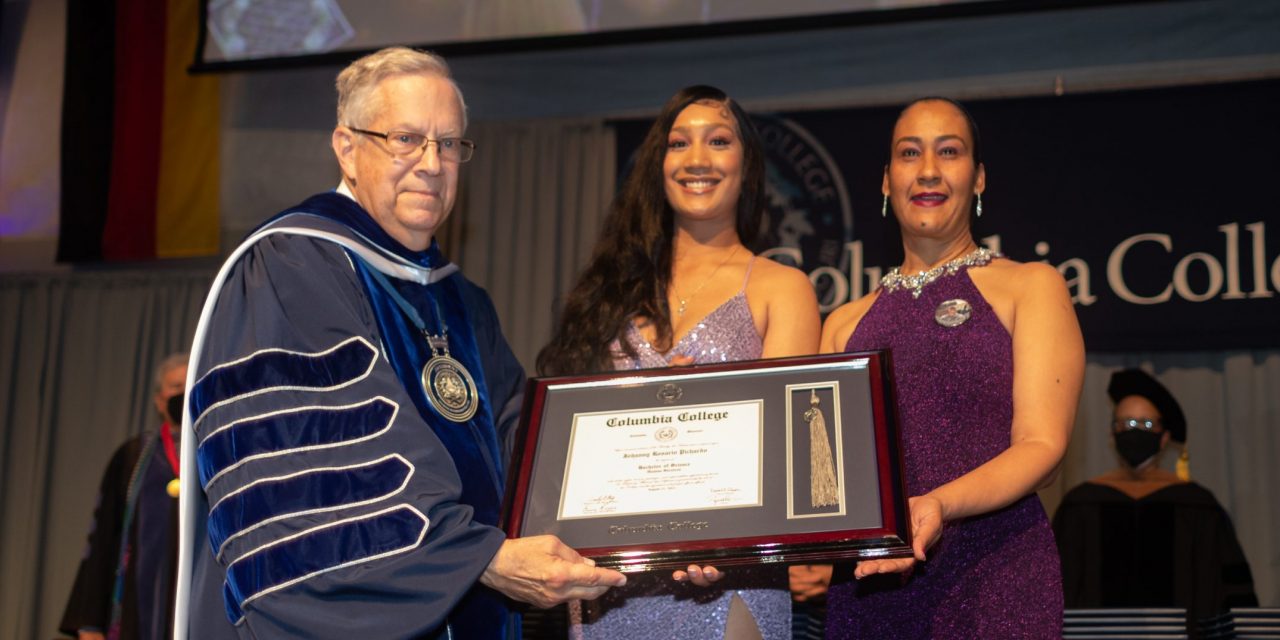 Sgt. Pichardo, who took classes through Columbia College’s Online Program and made the dean’s list while she was stationed at Marine Corps Recruit Depot San Diego, was among the nearly 200 individuals, including 13 American servicemembers, killed during a terrorist attack at the international airport in Kabul, Afghanistan, on August 26, 2021. On Saturday, her mother, Colasa, and sister, Rosie, were on stage to receive Johanny’s degree posthumously from Columbia College President Dr. David Russell.

Dr. Russell recounted stories from her former officer-in-charge in San Diego, who shared that Johanny worked a second part-time job caring for elderly patients with dementia, and took college courses to serve as a positive role models for her siblings and niece. “Serving on active duty with our country’s armed forces is not an easy task. Neither is taking a full-time load of college courses. Yet Johanny did both, and did them well,” Dr. Russell said. “Johanny was committed to her country and her community. We are profoundly saddened by her loss, and are honored to award this degree today.”

He also announced the creation of the Sgt. Johanny Rosario Pichardo Endowed Scholarship thanks to a generous founding gift from the Veterans United Foundation. The scholarship will benefit the lives of future military-affiliated students here at CC; additional information about the scholarship will be announced at the college’s Military Recognition Day on May 26.

More than 400 graduates walked across the stage during the two ceremonies. Shouts of “That’s my brother!,” “That’s my Mom!” and “Congratulations, baby girl!,” along with numerous other congratulations from the audience, rang throughout Southwell on Saturday, in the college’s first full-capacity ceremony in 29 months.

In his remarks to the graduates, Dr. Russell offered words of congratulations, gratitude and encouragement, congratulating them for staying focused on their goals. He also offered his thanks for choosing to receive a liberal arts education, noting that they are now prepared for the myriad challenges that will arise in their lives going forward. Finally, he offered encouragement that, given their experience at CC, they are now ready to lead. “Wherever you go from here, there will be people around you who need you. When that time comes, I know that you, too, will not hesitate to step forward and do your part.”

The best and the brightest members of the class of 2022 were on full display throughout the ceremony, including five students who earned the college’s prestigious Presidential Award for completing their degrees with perfect 4.0 GPAs:

Each ceremony’s student speaker took different routes to offer advice and wisdom to their fellow graduates. Emma Chedwick, who earned both a Bachelor of Science in Accounting and Business Administration, as well as a Bachelor of Science in Criminal Justice Administration through the college’s Day Program, told the crowd the three main lessons she’s learned in her time at CC: First, that failure genuinely does not matter in the long run, noting the 30-percent grade she received on her first in-class quiz as a college student, causing her to question if she was college material; second, to always ask a question when in doubt; and finally, to be a human, explaining that it’s not about the simple biology of existing but being empathetic, knowledgeable and beneficient to others. Chedwick will attend law school at the University of Missouri beginning this fall.

U.S. Army Master Sergeant Michael Nash, who received his Bachelor of Science in Business Administration degree through the college’s Online Program, flew to Columbia with his wife, Jennifer, from his assignment at Fort Wainwright, Alaska. During the afternoon ceremony, he told graduates of his path from post-9/11 Army recruit to college graduate. “Twenty years ago, I reported to Schofield Barracks, Hawaii. Ten years ago, I made the goal to get my college degree. Now, as my son graduates from high school, I’m finishing my college journey as he starts on his.”

Nash told the graduates that by earning their degrees, they’ve set themselves up for success in the future. He also encouraged them to seize the opportunities in front of them. “Please strive to do what you love, and the world will be a better place,” he said. Finally, he shared research that indicates that people who write down their goals are 42 percent more likely to attain them. He then pulled out a crumpled piece of paper that revealed his goal to become a licensed real-estate agent in Alaska within the next year.

Saturday was doubly special for Heather Russell and her daughter, Madison Lipford. Heather previously earned her B.A. in psychology from CC in 2011, and currently serves as the city administrator of Centralia, Missouri.

When Madison was looking at colleges in 2019, she told her mother to “stop pushing CC on me; I don’t want to go to CC.” Yet she relented enough to take a tour, and from the moment she set foot on main campus – on Heather’s birthday, no less – Madison realized her mother knew best. “It’s home. You’re right, it’s home,” she said of her mother’s recommendation. Just as Madison began her freshman year, Heather decided to return to CC to begin work toward a Masters degree in Business Administration.

“When I found out she was graduating this spring, I sped up my degree so that I could graduate at the same time as her,” Madison said. “I ended up finishing my degree (a Bachelor of Science in Criminal Justice) in three years.”

Both were happy to brag on each other. “She’s very smart,” Heather said of her daughter. At the same moment, Madison said, “she did this with five kids and a full-time job. And she kept a 4.0. We’ve really enjoyed this journey together. We’ve been study partners sometimes, each other’s support system. I’m immensely proud for my mom to do this. She’s been working so hard for this.”