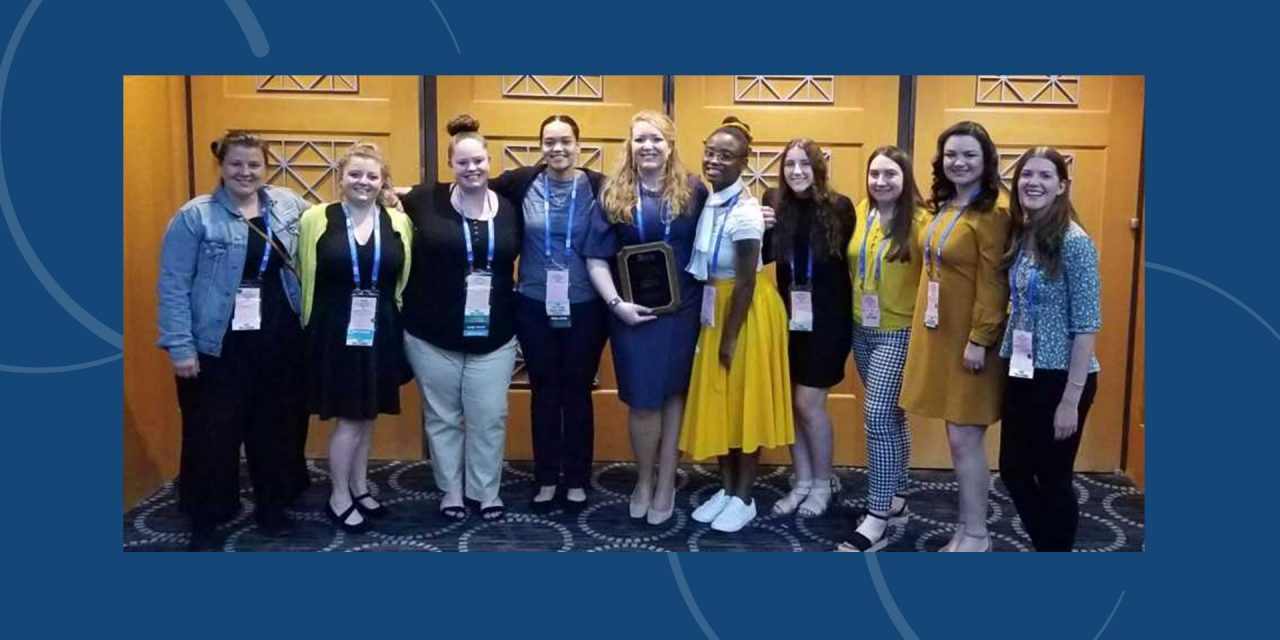 Although the Nursing program at Columbia College has been teaching established and aspiring nurses for more than 35 years, it continues to grow and evolve.

For the last year and a half, several students in the Bachelor of Science in Nursing program have worked toward creating an official chapter of the National Student Nurses Association (NSNA). In March, the chapter received word of their acceptance within the national organization.

It was just the first among several milestones for this group of passionate students.

In an effort to boost the college’s profile nationally, as well as take part in networking and other opportunities, nine members of the Columbia College Student Nurses Association (CCSNA) joined their advisor, Assistant Nursing Professor Dr. Heidi Monroe, at the NSNA national convention in Salt Lake City, Utah. Among the group were six seniors who graduated last month, as well as three juniors who begin their final year at CC this fall.

CCNSA’s mission is to promote leadership, education, advocacy and collaboration – both within CC’s different nursing programs and cohorts, but also with other nursing schools – as well as interdisciplinary and legislative activities. The organization fosters a culture of leadership by encouraging students to serve by running for office on a chapter, state or national level.

Indeed, two juniors in the BSN program are members of the Missouri Nurses Student Association (MONSA) executive board: Lindsey Campbell is vice president of the state organization, and Liv Turner serves as director of the Northern region.

It was a laborious process for the students – “There was a lot of tedious paperwork, I’m not going to lie,” said Brianne O’Sullivan, who was part of the core group who worked on the chapter’s bylaws and mission – but ultimately rewarding. “When we got the opportunity to go to Utah and follow a path to continue our career and education, it was a no-brainer.” O’Sullivan has secured a position with Women’s and Children’s Hospital at the University of Missouri in the pediatric ICU.

The effort to get to Salt Lake City itself for the NSNA convention was heroic. Dr. Monroe noted the group raised $8,000 in less than two weeks. The college’s TRIO Student Support Services, under the direction of Mary Browning, and the CC Student Government Association both provided significant financial support, as did a GoFundMe campaign. Dr. Corrine Floyd, director and chair of the Nursing department, offered her own support as well, both as a donor and as a champion of her students.

One of the largest sources of funding, around $1,600, came via a bake sale. “The students that wanted to go just rallied together and made a schedule of who was going to cook what, who was going to man a table around campus, and they put it together in a day,” said Campbell, who also serves as president of the rising senior cohort of BSN students at CC. “It was so great, and everybody on campus loved it.”

While at NSNA in Utah, the students listened to renowned nursing leaders, learned about job opportunities and scholarships, participated in leadership and career development activities and collaborated and networked with more than 1,500 other nursing students from across the country.

In addition, Dr. Monroe was recognized at NSNA by winning the 2022 Weingarten Leader of Leaders Award, which is presented to an outstanding dean, faculty advisor, or state consultant who demonstrates distinguished support and service to nursing students. She was nominated by her students for her support and service to CC’s students in their efforts to launch CCSNA, and is just the fourth faculty member to ever receive this award from NSNA.

Columbia College made a splash in Salt Lake City, to the point that Desma Reno, the state consultant for MONSA, compared the group to the Rich Strike’s viral underdog win at this year’s Kentucky Derby horse race. “It went a lot like that race, they came into it quickly and won the race out the middle of the chute.”

Monroe credits six graduating seniors in particular – O’Sullivan, Chenoa Cue, Ebony Kimmins, Alexandra Coones, Emily McBride and Carlota Garcia – for their efforts in getting CCSNA off the ground. Each was presented with the CCSNA Pioneer Award for their efforts at last month’s Nurses Pinning ceremony.

While O’Sullivan and Cue, who graduated last month with her BSN and will be working in pediatrics at the University of California San Francisco near her hometown of Rohnert Park, California, have moved onto their professional careers, the four rising seniors –Campbell, Turner, Heather Black and Reagan Hicks – are tasked with sustaining what the group has started.

Cue couldn’t contain her joy over the future of CCNSA. “I am so excited to see what Lindsey and the others are going to accomplish because we are creating this network, this coalition of students that just want to better themselves and their peers and leave a legacy for those behind us.”

Reno says that nurses who are part of their local and state SNA chapters usually end up being better nurses, both for their patients and their employers. “It says a lot about their integrity, their character, their motivation to work as part of a team. It’s part of being a good nursing professional.