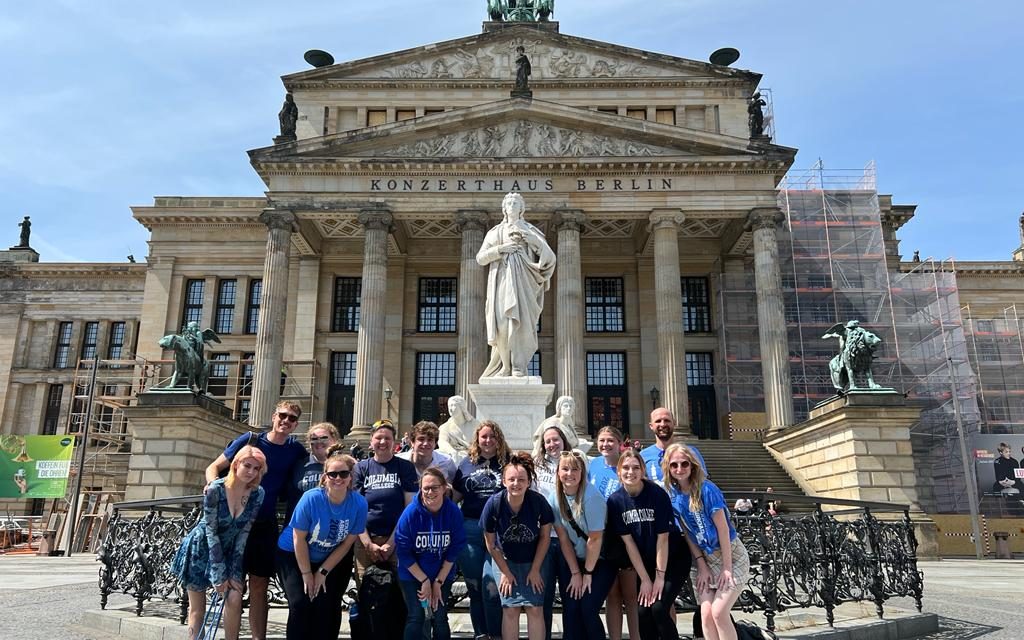 On Monday May 2, 12 Columbia College students, including seven who graduated on Saturday, left Columbia for St. Louis’ Lambert International Airport, accompanied by Drs. Blake Nielsen and Gretchen Hendrickson. Overnight, they’ll arrive in Munich to begin a 10-day tour of Europe.

This post-commencement trip was voted on by students during the fall of 2020 and was among three options presented. Prior to departure, many of the traveling students enrolled in Dr. Nielsen’s Spring Semester “Psychology of the Holocaust” class. Within this course, students learned about the origins of research ethics, explored the psychological effects of authority, aggression and obedience, and discovered the roles that rescuers played during the Holocaust.

Berlin-Paris-Detroit-Saint Louis. The group navigated these cities during the 23-hour return trip to Missouri. Jet lagged and hungry, everyone was glad to get home. It’s safe to say, our 10-day journey abroad was a huge success for CC’s students. They got to explore five major European cities, learn about different cultures, form new friendships, and build skills that will last a lifetime.

Highlights from the final days included a walking tour of Berlin, visiting Checkpoint Charlie, spotting the former spy tours on both sides of the Berlin Wall, one last meal at Hopfingerbräu at the Brandenburg Gate, and navigating large international airports.

As the group prepared to leave Europe, it was easy to overhear conversations about students’ favorite moments and their future plans to return to the continent. There is a big world out there and we so glad we got to explore a part of it.

If you would like to learn more about Columbia College’s Education Abroad programs, you can find more information at ccis.edu/degrees/education-abroad. You can also send inquiries to educationabroad@ccis.edu.

Hello from Berlin. Today was our last full official day in Europe. In the morning, we went on a 3-hour walking tour with our local guide, Rob. In the afternoon, we visited the Topography of Terror Museum. During the day, students had many opportunities for free time to explore the city. A few wanted to update you on what they did.

Ahoj and Guten Tag from Europe!

A two hour bus ride later, CC stopped in Dresden, historically one of the biggest mining areas and a city that was extremely rich during the 18th century. Dresden was bombed heavily and destroyed during WWII. Our stop at Dresden consisted of visiting the Royal Church, the Royal Palace, and the Church of Our Lady, which took donations from all over the world and 20 years to rebuild. Because of the over 300 bombings a lot of Berlin had to be rebuilt, including the Church of Our Lady.

After taking in the beautiful scenery, CC jumped back on the bus for another two hours to our last destination of the trip, Berlin and ended with a small walk through Berlin and then dinner.

After a delicious dinner the CC abroad students stopped for a picture in front of the Brandenberg Gate before heading to the hotel to prepare for a full day in Berlin tomorrow!

Ahoj once again from Prague, Czechia! Wrapping up our final day in the breathtaking city of Prague has been filled with incomparable experiences that we’ll remember forever! We began the day with a very heavy yet exceptional tour of a historic Jewish synagogue and cemetery. The site paid homage to thousands of Jewish Holocaust victims, and has allowed us to experience an even deeper connection to and understanding of such dark history that is crucial to never forget. While these tours during our trip have been all except joyful, we honor them as incredible sources of education, information, and advocacy for a better world.

Following the synagogue tour, we stopped at a local shop and shared a popular Czech dessert known as Trdelník as a group. Getting to experience the cultural foods of the Czech Republic has truly been a thrill! Afterwards, we did some more exploring of Prague before regrouping for a brewery tour of the city’s famous beer making processes!

Finally, we enjoyed dinner once more with an incredible sunset view over the canal. Prague has been nothing short of incredible, and we all hope to be able to return soon!

Waking up in Prague to breathtaking views of the city was a once in a lifetime experience. We were able to venture to many different locations famous in this valued town. From the Prague Castle (Pražský hrad), St. Vitus Cathedral (Katedrála Sv. Víta), Golden Lane, Wallenstein Garden (Valdštejnská zahrada), and the Charles Bridge, it was so incredible to view the historic sights that survived from World War II bombings. That is the one special thing about Prague—because the city survived the bombs, you are able to see the evolution of architecture all the way back to the 10th century! We saw styles from Gothic, to Baroque, and even Renaissance! It was so mesmerizing to walk from one building to another being able to go back to each century in a span of minutes. Absolutely amazing!

Today was our first official day in Prague, and we get to spend one more day here before we venture off to Berlin! We hope you continue to follow along on our journey.

Guten Tag and Ahoj from our Columbia College travelers. Another day full of bus rides, beautiful walks through the cities, indulging in the common cuisine, and taking in the architecture has left us more immersed in Munich, Nuremberg, and Prague’s culture. Our seven-hour bus ride allowed us to explore a wide variety of tasty treats with breakfast in Munich, lunch in Nuremberg, and dinner in Prague.

Today was our last morning in Munich. Our wonderful days in Munich have prepared us for our last portion of the trip followed by a few nights in Prague and Berlin. Leaving Munich, we experienced the German hillsides with the start of their farming season. Our stop in Nuremberg was heavy-hearted as we learned about the Nazi Rally place within the city. Now, the city has transformed the place once housing some of the darkest parts of history and made it into a place of beauty and memorial for the population harmed.

Our final destination brought even more beautiful architecture. The streets of Prague were filled with people, greenery, and delicious food. We all sat for a authentic meal in Prague while overlooking the river.

On May 5, members of the group traveled to Neuschwanstein Castle in southwest Germany. The 19th-century castle was commissioned by King Ludwig II of Bavaria as a retreat tucked away in the Alps. For today’s travelogue, the students and professors that ventured to Neuschwanstein posted their favorite memory from the day.

We went to many places today, and I could talk about how much fun we had, how good the food was, or lots of other things that made this day fun. However, the trip to Dachau was of particular importance. It’s critical to explain not only the fun things, but also the aspects of the trip that make a deep impact on us.

Dachau was a concentration camp primarily for political prisoners, and it was not the fun, bubbly experience that the rest of the trip has been so far. There were stories of atrocities committed there that shed light on the underlying biases that made the Holocaust possible. Among prisoners of different backgrounds, there remained a hierarchy that couldn’t be shaken. Even after the Holocaust, there were certain survivors who were seen as being more deserving of sympathy than others.

Overall, the heaviness we felt at the Dachau concentration camp stood at odds with the beauty of the nature surrounding it. There was a beautiful trail with memorial sites, and the birds were chirping as if nothing had happened there. In the images, you will see a stark contrast between the natural beauty and the piercing imagery of the buildings that housed prisoners of the camp.

We started off our trip and hit the ground running straight from the airport! After landing first thing in the morning, we took a bus into the city square and got the surprise of a lifetime when our tour guide casually showed us a bunch of locals surfing a current in Olympia Park! It was amazing to watch! We then got the opportunity to walk over to the New Town Hall pictured in all its grandeur. And we even got to go to the top and look out at the city in all its beauty! Truly an amazing first day!