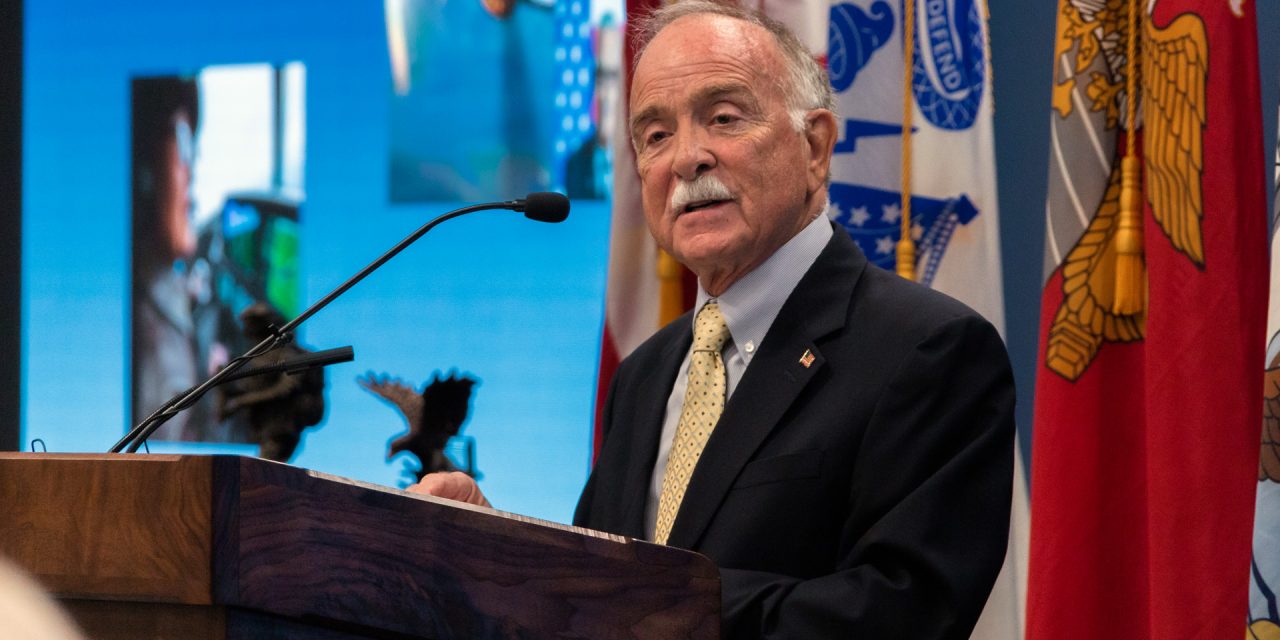 Retired Air Force Col. Mike Randerson, who served as vice president of what is now Columbia College Global from 1995-2014 and is now a member of the college’s Board of Trustees, provided the keynote address in honor of “his personal hero,” who passed away in January at the age of 102.

McGee’s life story, Randerson said, “has been eloquently heralded by four U.S. presidents, foreign heads of state, members of Congress, and other dignitaries too numerous to mention. His story is so compelling and uplifting that it will be told for generations.”

The 25-year Air Force veteran shared three main perspectives on McGee’s life: that of a true patriot, serving as an aviator in three foreign wars; as a quiet, steady warrior during a fourth war against racial bigotry and intolerance in his home country; and as a personal friend and mentor during his near-annual visits to Columbia later in life.

On the first point, Randerson noted McGee’s military record – flying fighter aircraft combat tours during World War II as well as the Korean and Vietnam Wars – was both remarkable and unparalleled. At the time of his retirement, after which he’d logged more than 6,000 total flight hours, McGee held the Air Force’s records for most combat missions (409) and combat hours (1,151) flown. “He was a living Air Force legend,” said Randerson.

He then spoke of the fourth war McGee fought at home. Randerson noted that McGee’s patriotism, dedication to service and achievements were even more remarkable while he and his family faced a fourth war here in America: the all-too-frequent racial disrespect and injustice, simply for being a Black American. “The country he loved, and served so well, didn’t always love him back.”

Finally, Col. Randerson recalled with joy and amusement the frequent trips Gen. McGee made to Columbia through his work with the Salute to Veterans Air Show held each Memorial Day weekend, as well as special Columbia College events such as today’s annual Military Recognition Day.

Randerson closed his remarks by paraphrasing those made by President George W. Bush in 2007, when he awarded McGee and his fellow Tuskegee Airmen with the Congressional Gold Medal:

General Charles Edward McGee, a Tuskegee Airman, helped win the Great War, and fought bravely in two others. He helped change our nation, and Columbia College, for the better. His story is the story of the human spirit, and it ends like all great stories do: with wisdom, lessons, and hope for tomorrow. He inspired a nation, and the scholarships awarded in his name today means that Columbia College is doing a small part to ensure his story will be told and honored for generations to come.

Several members of Gen. McGee’s family were able to watch Randerson’s tribute virtually. McGee’s daughter, Dr. Charlene McGee Smith, wrote a book about her father’s life, which Randerson referenced during his speech. She passed along a note after the ceremony, saying, “Wonderful! You captured my father so well. I so appreciate your excellent presentation.”

Last month during commencement exercises at CC, President Dr. David Russell announced the formation of the Sgt. Johanny Rosario Pichardo Endowed Scholarship. During today’s ceremony, Senior Director of Philanthropy Missy Montgomery recognized a generous founding gift of $50,000 toward the scholarship by the Veterans United Foundation. Montgomery also expressed gratitude on behalf of the college for the Ousley family generously providing one of their five scholarships to honor Sgt. Pichardo. Ryan Addington, a student in the Online Program who is pursuing a degree in business administration while serving in the Air Force, was awarded that Ousley Scholarship in Sgt. Pichardo’s honor.

Keith Glindemann, senior director of Military Recruiting and Veterans Services, presided over the awarding of 22 scholarships to military-affiliated students, including three that were given for the first time.

Among the inaugural award presentations was the Lee Terry Russell Military Spouse Scholarship, which was generously created by Dr. Russell in honor of his wife and the college’s first lady, Lee. As a self-described military brat, she moved with her family to every part of the United States as well as the Middle East, Japan and several islands in the Pacific. Lee’s experiences taught her how challenging military life can be for families, which fostered the desire to pay it forward to current military spouses.

The first recipient of the award is Brooke McWilliams, a Navy spouse who is currently stationed with her family at Naval Base Guantanamo Bay, Cuba. Brooke is studying for her Bachelor of Science in Business Administration at the college’s location there, and once her spouse retires from military service, they hope to open their own business.

The Dr. Calvin S. Posner ’76 Military Award was established in gratitude of the assistance Columbia College provided Dr. Posner early in his Army career while on active duty. After earning bachelor’s and master’s degrees, and after retiring from the Army as a staff sergeant, he went on to hold executive positions in business and government, as over his career has served as an instructor in the military, financial services industry and the public sector.

Rizalina Ngiraingas is the first Posner recipient. She is currently serving in active duty in the Navy and is pursuing her Bachelor of Science in Finance at our location at Naval Base San Diego.

The Landon Miller Scholarship for Veterans was created by Dr. Lowell Miller in honor of his grandson, Landon Miller ’18, a Marine Corps Reserve veteran who not only received academic honors while at CC, but strived to make a difference in his fellow veterans’ lives. Miller has since completed law school at the University of Missouri and is now practicing law in the Columbia area.

The first recipient of Miller Scholarship is Justin Oleson, a master’s student in the Online Program. Justin is currently serving in the Army Reserve and is working to complete his Master of Science in Criminal Justice Administration.

If you would like to support military scholarships at Columbia College, please visit my.ccis.edu/military.

Here is the full list of scholarship winners from Thursday’s ceremony: