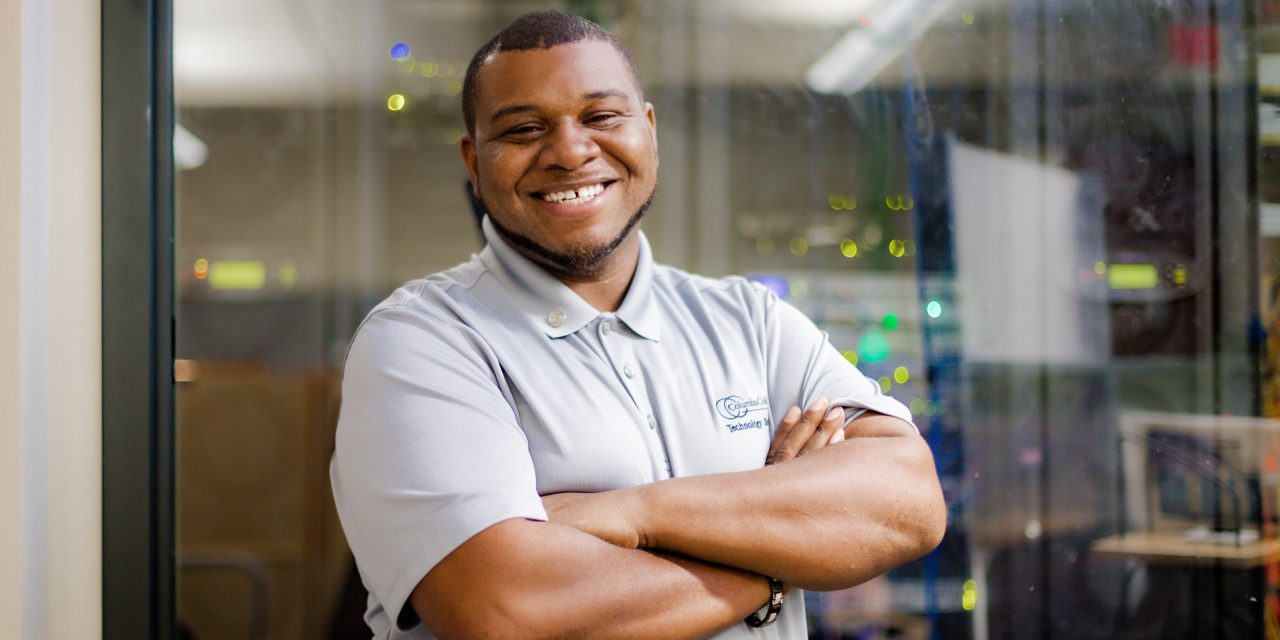 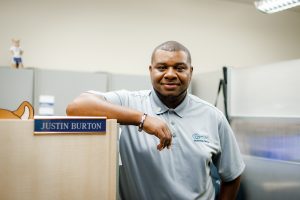 If you’ve been a part of Columbia College’s main campus community the past six years, there’s a good chance you’ve interacted with Justin Burton. Holding four different positions across his current tenure with the college, Burton consistently brings a positive attitude and smile to the workplace each day.

Prior to his new role as a help desk analyst with the college’s Technology Services team, Burton was routinely spotted around the college as a campus safety officer. Whether it was a student, faculty and staff member or a high school family taking an official campus visit, the Columbia, Missouri, native would always say hello and make everyone feel welcome.

“I’ve never worked in a job environment before where everyone smiled, waved or even spoke to you every day,” said Burton. “I’ve loved every single job I’ve had at Columbia College with a passion. The Campus Safety department was my all-time favorite. I really enjoyed talking to college students, faculty and staff, and building relationships with everyone was awesome.”

In his early stages as a campus safety officer, fellow officer – Wyatt Dawdy – challenged Burton to revisit his education goals and complete his high school diploma. Dawdy connected Burton with the local Goodwill Excel Center, which allows adult learners to go back to school and finish their degree from where they last left off.

Following an introductory meeting with Excel Center staff and leadership, Burton’s excitement and personal drive to make this quest a reality grew even more.

“I was extremely pumped about it and signed up ASAP,” said Burton. “I had two-and-a-half credits remaining to complete my old diploma. I started the program and ended up meeting some of the best people in Columbia. They really pushed me until I completed the program successfully. I had the biggest support group I’ve ever had in my life. To this day, I communicate with the staff as if I’ve never left.”

Two individuals at the Excel Center who played a pivotal role in his success were Life Coach Sheila Ferguson and Math Instructor Maggie Jackson. Together, they worked hand-in-hand with Burton to create an obtainable graduation plan that best fit his schedule and personal goals.

To no surprise, Burton’s beaming personality and willingness to improve himself meshed immediately with both Ferguson and Jackson. He quickly set himself apart from other classmates and made an instant and long-lasting impression with the Excel Center staff.

“Justin was an incredibly motivated individual, who never gave up, even when classes became difficult,” said Jackson. “For example, geometry was challenging for him, but he came to tutoring, asked for help and passed the course! I wish every student had that kind of drive. I will always be thankful to him for being an all-around great man, who even offered to walk our other night teacher, Leeanne, and myself to our cars when it was late at night. I truly couldn’t have asked for a better student.”

In May, Burton’s hard work and dedication paid off as he walked across the stage at the Excel Center graduation. Emotions were running high as he reflected on his journey towards achieving this goal. He recalled his first-ever conversation with the Excel Center, as former teacher Jamy Preul, who was the mother-in-law of Director of Alumni Relations Carolyn Preul, built an instant connection with him. Tragically, about a year later, Preul passed away from COVID-19 complications and left Burton heartbroken.

The Excel Center May 2021 commencement was held in Launer Auditorium at Columbia College, bringing Burton’s journey full circle. As part of the evening’s ceremonies, he was awarded a scholarship in Preul’s memory.

“Before they started calling names of the graduates, they called me up on the stage and I won a scholarship in her name,” said Burton. “I was so emotional and I cried and others cried along with me. It was a really special moment for me. She was the one who gave me hope as I started my journey with them.”

Currently, Burton is pursuing his degree at Columbia College. With his new diploma in hand and his professional career continuing to grow, Burton will forever be grateful towards the individuals he’s met while at CC.

“Everyone I’ve worked with at the college has supported me in so many ways and I don’t see myself working anywhere else.” said Burton. “My previous supervisor, Director of Campus Safety David Heffer, has been there for me since we first met. He’s still number one on my list and one of my favorite individuals in the world. A few weeks after graduation, I called former Director of Campus Safety Bob Klausmeyer and jokingly asked him If I met the deadline we agreed on back in the day. He laughed and then congratulated me. If it wasn’t for him, I wouldn’t be where I am today.”