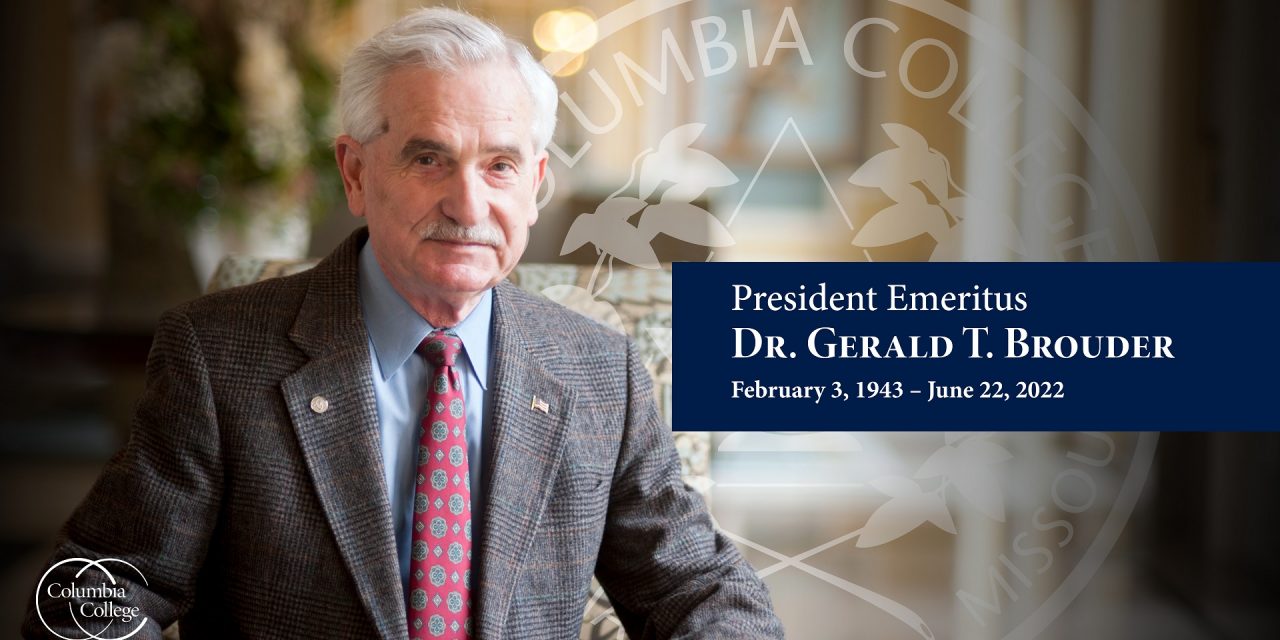 One of Columbia College’s most transformational leaders, and its 16th president, Dr. Gerald Brouder, passed away Wednesday, June 22, here in Columbia. He was 79.

Alongside his wife and first lady, Bonnie, Dr. Brouder had an immeasurable impact, not only on Columbia College, but as a vital part of the fabric of the Columbia community as a whole. He was one of the college’s longest-tenured presidents, serving from 1995 until his retirement in 2013, when he became just the second president in the college’s 171-year history to receive emeritus status.

Brouder presided over the creation of both the college’s graduate programs in 1996 and its pioneering online program in 2000. As a result, the college experienced record enrollment growth in its Adult Higher Education (now Columbia College Global) division. He was admired for his contributions to the sciences, his commitment to fiscal responsibility and his dedication to academic excellence. Brouder was also beloved for his civility and respect for everyone who passed through Rogers Gate, be they student, faculty, staff or friend.

At the time of Brouder’s selection to head CC, current President Dr. David Russell was serving as state higher education commissioner. “﻿I am profoundly saddened by the news of Dr. Brouder’s passing. He made a significant impact on Columbia College and his legendary contributions to our success live on years after his retirement,” Russell said. “Dr. Brouder and I worked together for years to strengthen Missouri higher education policies designed to help students successfully complete their college degrees. He was highly respected by his peers in the independent college sector as a thought leader. I always found him to be a tireless advocate for students and a servant leader of the first order. Our faculty, staff and alumni loved him. We will miss him.”

The college originally produced this video in 2013 in tribute to Dr. Brouder upon his retirement from the college.

In a video announcing his emeritus status in 2013, Brouder pointed out that he had three main goals for his time at CC: increasing the college’s endowment, advancing technology, and deepening and strengthening the sciences.

Those three goals were best encapsulated in the final capital project of his tenure, a state-of-the-art science facility that opened just months after his retirement. It is fitting that it – the Gerald T. and Bonnie M. Brouder Science Center – was named in their honor.

The Brouders also were instrumental in creating what are some of today’s most cherished traditions at Columbia College. The first Holiday Lighting, which bathes the buildings surrounding Bass Commons in lights each December, took place in 1996. In addition, the college’s “Storm the Gate” celebration to welcome new students began in 2012. As first lady, Mrs. Brouder, in particular, took great care to bolster the college’s archives over their 18 years at CC.

Born in Chicago on February 3, 1943, Brouder joined the Army after graduating from high school. He served in the medical corps in the Army and, once his duties were fulfilled, went to work in an operating room at a children’s hospital in Chicago. A series of “epiphanies,” as he put it, led him to steadily build his educational credentials in the nursing field. He first obtained his associate degree, then his bachelor’s and master’s degrees.

Brouder served in the medical corps in the Army, which led him to his lifelong career as a nursing educator. He earned his Ph.D. in nursing from the University of Texas, and was hired as a faculty member in the School of Nursing at the University of Missouri. He spent 17 years at Mizzou and served as interim chancellor, deputy chancellor and provost. He also held other various positions within the administration and at the medical center before Columbia College came calling.

A 2013 Affinity article summarizing Dr. Brouder’s tenure included this excellent quote, which perfectly illustrates his philosophy: “We respect teaching and learning,” he says. “You can see it in the quality of the teachers we hire; you can see it in the grounds. The sidewalks are edged, the flowers are beautiful … that’s not to spend money on horticulture, that’s to show people you respect the venue in which that awesome responsibility takes place where teaching turns into learning. You’ve got to honor the fact that what we do is grow intellects. We change people’s lives. It’s an awesome responsibility.”

In tribute to Dr. Brouder, all Columbia College flags will be lowered to half-staff.

In lieu of flowers, the family requests donations made in his honor to either Columbia College or to Father Tolton Catholic High School. The college is proud to accept gifts directed to the Gerald T. and Bonnie M. Brouder Science Center. All funds will continue to support the legacy of Dr. Gerald T. Brouder by continuing to offer educational opportunities for students studying the sciences.