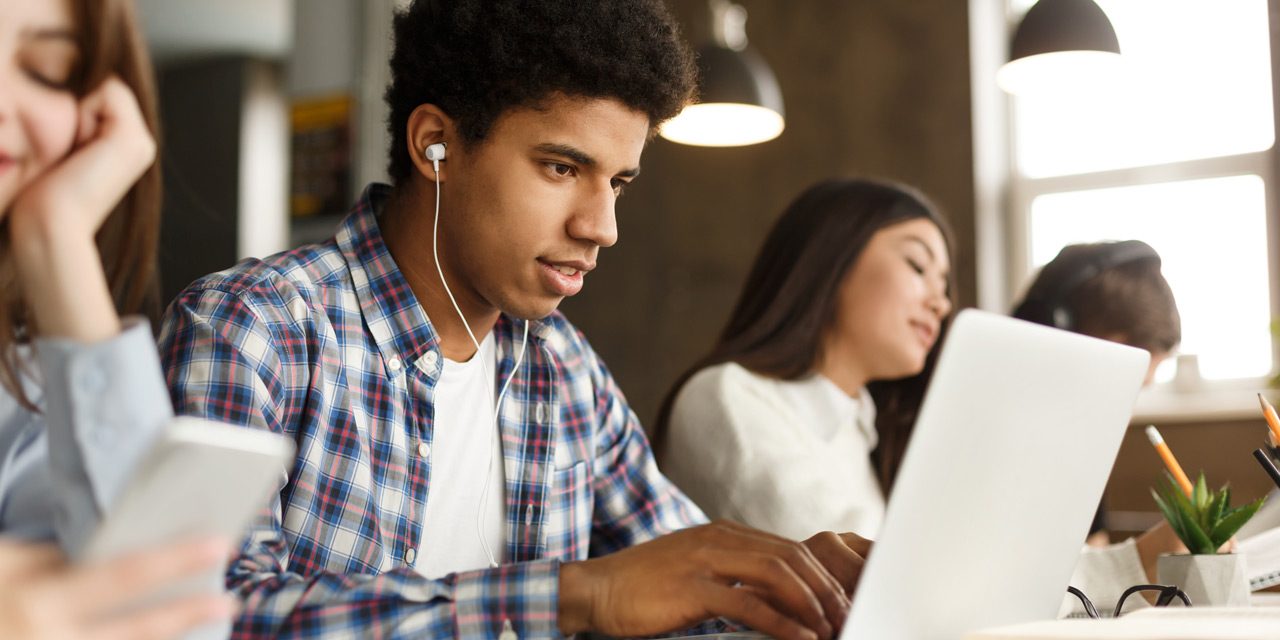 While the pandemic upended everyone’s routines, especially when it comes to learning, several students have discovered that the short-term headaches they experienced in changing learning modalities – think in-seat vs. online vs. virtual/Zoom – has given them greater flexibility as they continue their education. They come from diverse backgrounds, but they have a common thread – Columbia College has given them what they need, how they need it.

Transitioning from in-seat learning to Zoom might have become a pain for many, but for Thomas Gay, a student at the college’s location at Naval Station Everett/Marysville, Washington, it became his preference.

Thomas originally enjoyed his in-seat evening classes in Marysville, but as he moved into his junior and senior years of study, the in-seat schedule didn’t match his work schedule as a civilian Navy ship-building specialist at NS Everett. In addition, the 40- to 60-minute commute to his home in Snohomish made things equally difficult. With the switch to virtual classes via Zoom – two of his classes are based out of Missouri, so the time change works perfectly as his workday ends in the middle of the afternoons – he’s able to login from his office at home. “It took a little getting used to, but after a while, I really enjoyed it,” Gay says.

Back in the saddle

You can count Damien Comeaux among those students grateful for the return to in-seat learning. Comeaux began his college journey two years ago at the age of 22, four years after a severe knee injury during Army service in Korea and surgeries on both knees ended his military career. Now back in Fort Sill, Oklahoma, where he was shipped out for his first deployment, Comeaux worked through his disability benefits to begin taking classes at the college’s location on the installation at Fort Sill.

He had grown accustomed to the in-seat environment thanks to his military classes, so the classroom at Fort Sill was not much of an adjustment. Yet three months into his classes, the pandemic shifted everyone to a virtual setting. “I wasn’t familiar with Skype, and FaceTime was the only video experience I’d had,” he says. “It was a little scary stepping into virtual, especially for education.”

Yet Comeaux quickly got the hang of virtual classes. Like everyone else, he got used to wearing whatever he wanted in the comfort of his own home, and became accustomed to the convenience of Zoom. Yet once things started opening back up, Comeaux returned to in-seat learning, and noticed the difference. “There’s a social aspect that Zoom lacks; it’s definitely a different learning experience,” he says.

Comeaux earned an Associate in Business Administration degree, and has been employed as a student worker in the Fort Sill location office since March. He is currently working toward a bachelor’s degree in finance which he is projected to earn in December 2023. He has advice for fellow students that come into the office. “A lot of people think virtual will be easier. If you’re used to in-seat and want the full college experience, do in-seat.”

Online and loving it

Emmet Fried earned an associate degree – primarily via in-seat classes – from Imperial Valley College, a community college in California that has an articulation agreement with Columbia College. His advisor and one of his instructors at IVC, Guillermo Salgado, also serves as the director of Columbia College-Imperial, and convinced Fried to enroll at CC and pursue a bachelor’s degree in business administration. “[Guillermo] took a liking to me. I loved the course, and loved business. We became good friends. He really pushed CC, and I had a lot of interest, but a lot of factors kept me from doing it.”

At the time, Fried was serving as a corporal in the Marine Corps Reserves, and because his 2nd Battalion, 23rd Marines, G Company was called in to support the processing of Afghani refugees, he had to put his studies on hold. But he kept in touch with Salgado, who ultimately turned over advising duties to his colleague Veronica Alvarado; as advisor for the college’s military-heavy students in the San Diego area, she was much more in tune with military students’ needs.

Alvarado modified his schedule to better align with his degree path, while also understanding that Fried needed flexibility in his schedule, so he attended exclusively online. “I could do virtual education or in-seat, but the problem is time; I have to squeeze in assignments here and there, in bits and pieces,” Fried says. “I enjoyed in-seat very much while I was getting my associate degree, but it comes and goes. There are in-seat classes I’ve taken where the lecture doesn’t provide much value, so you end up reading the book to teach yourself anyway.”

While he was beginning this new journey, Fried was not only promoted to sergeant, but married his beloved wife Laura and became the principal for a local faith-based elementary school, Brawley Christian Academy. He also can’t express enough gratitude for the faculty and staff at Columbia College. “The funny thing with online is that my professors have been exceptionally available and accessible. I’ve really appreciated the time they’ve given me, let along the other students in my classes,” he says.

As an aside, one would assume that students in the Online Program – by far the majority of the college’s nearly 10,000 students this semester – would be the most firm in their desire to remain in their learning mode. Yet Joie Hendricks, the college’s director of Online Student Services, says that’s not necessarily the case. “I do know that we have a population of students who really appreciates being about to take Math, English, and Speech through either the virtual modality or in-seat at a location,” she says. “Those courses can be difficult to do entirely online, and having virtual and in-seat options has been very appealing for some students.” Hendricks also notes that because of the college’s numerous options, staff doesn’t have to spend time recommending a student take a course in-seat at another college, then transferring that credit into to the student’s CC transcript.

In the end, it’s all about what’s best for the student, and no matter how you thrive best, Columbia College is here for you. “I get off early because I start early,” says Gay, the virtual student from NS Everett/Marysville. “I think CC is great for the working adult.”