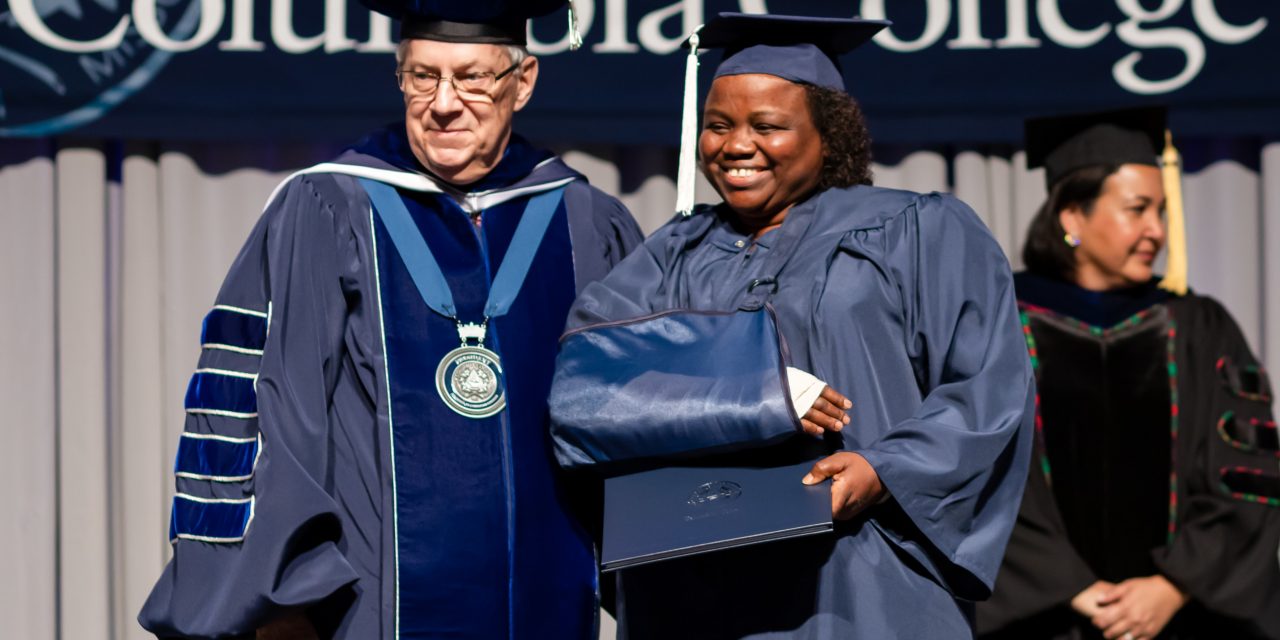 Columbia College graduates overcome a wide array of obstacles on the path toward their degrees.

Many people experience more twists and turns during their academic progression than they can count.

Judith Ntimpa’s lifelong journey takes that to another level.

Ntimpa barely knew a word of English when she arrived in the United States in 2009 after spending 15 years at a refugee camp in Tanzania.

The Rwanda native was one of 187 students to receive their diplomas from Columbia College on Saturday at the Southwell Complex on main campus and was part of a 23-member class who received nursing pins in a ceremony Friday night.

She earned the Nightingale Award, voted by classmates as the member of the graduating nursing class who epitomizes the art and science of nursing and demonstrates exceptional leadership.

Her Associate in Science in Nursing degree represents a meaningfully realized dream.

“I always have wanted to be a nurse,” Ntimpa says. “It has been my goal.”

Ntimpa lived in Rwanda until she was 17 years old, when the Rwandan Genocide of 1994 forced her to flee her home country to the Republic of Congo for three months and then Tanzania more permanently.

She spent the next 15 years at Mtabila Refugee Camp in Kasulu, Tanzania. She met her husband, Jean Claude Ntimpa, while there, and together they started a family that includes seven biological children. She completed a French nursing program through the refugee camp as her family was in the midst of a three-year interview process to resettle to the U.S.

“It was challenging but I learned a lot,” Ntimpa says of the refugee camp. “I think that’s what helps me to survive any condition. You go there, they give you materials and you make your house on your own, you receive food, basic needs. You make it home. It taught me to be tough.”

In September 2009, with six kids and their seventh on the way (they have since adopted five more), the Ntimpas moved to Missouri, where their lone connection was a family friend. The family settled down in Jefferson City and now reside there in a home donated by Habitat for Humanity.

Jean Claude is an associate pastor at Christian Fellowship Church in Columbia.

Ntimpa enrolled in English as a Second Language courses and completed her General Educational Development (GED) through the Jefferson City School District in 2014. She earned her Licensed Practical Nurse (LPN) certification from State Technical College in May 2018.

She has worked five years at Stonebridge Senior Living in Westphalia, where she was selected as the 2020 employee of the year.

Her desire to pursue her nursing dream didn’t fade over time, but rather intensified.

“Maybe I can do something more,’” she recalls saying. “That’s when I joined Columbia College.”

She first took prerequisite classes while trying to get into the nursing program. Then, several years later, she gained entry into CC’s 13-month associate program. 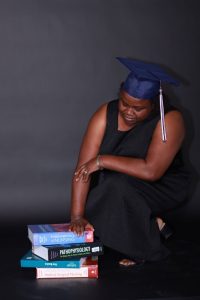 Judith Ntimpa, Associate in Science in Nursing graduate, poses for a photo ahead of Fall 2022 commencement. Photo provided by the Ntimpa family

She says she has appreciated the pace of instruction within the nursing department.

“We have one class at a time,” she says, “and that’s something I really appreciate, because you are focusing on one thing.”

Her degree carries a lesson that we all can learn from, says Jean Claude, her husband.

Reflecting on their journey, he says he is not surprised his wife is revered among her CC peers.

“She made it and I thank God for that,” he said of her graduation. “I am really proud of her. She is very social to the people. She loves people.”

Ntimpa says she hopes her experiences will demonstrate to others how to fight through adversity.

“This is a teaching moment for my kids,” she said. “They don’t have excuses. They can’t say I’m not going to school, because I’m still going in my late 40s. This also is a tool to teach women and young girls that they can do it. It doesn’t matter what happened; one day, you can reach your goal.”

Ntimpa views one of the toughest challenges of her transition to America as a blessing in disguise.

Fluent in about five languages, she helps translate during a Sunday evening African multi-lingual service at the family’s church, and it has opened new doors both personally and professionally.

“Language can be a barrier, but it can be something good,” Ntimpa says. “I believe to know English – still learning, of course, after 12 years – is a blessing from God so I can help other people.”

Ntimpa is quick to deflect praise about her accomplishments and to thank those who have supported her and her family. She invited organizations who funded scholarships for her in the past to attend this weekend’s graduation festivities – including a party after her ceremony.

Not even a broken arm on the day of her pinning could keep her from having a smile on her face.

“This degree is not for me myself, it’s for the community,” she says. “I’m going to use it.” 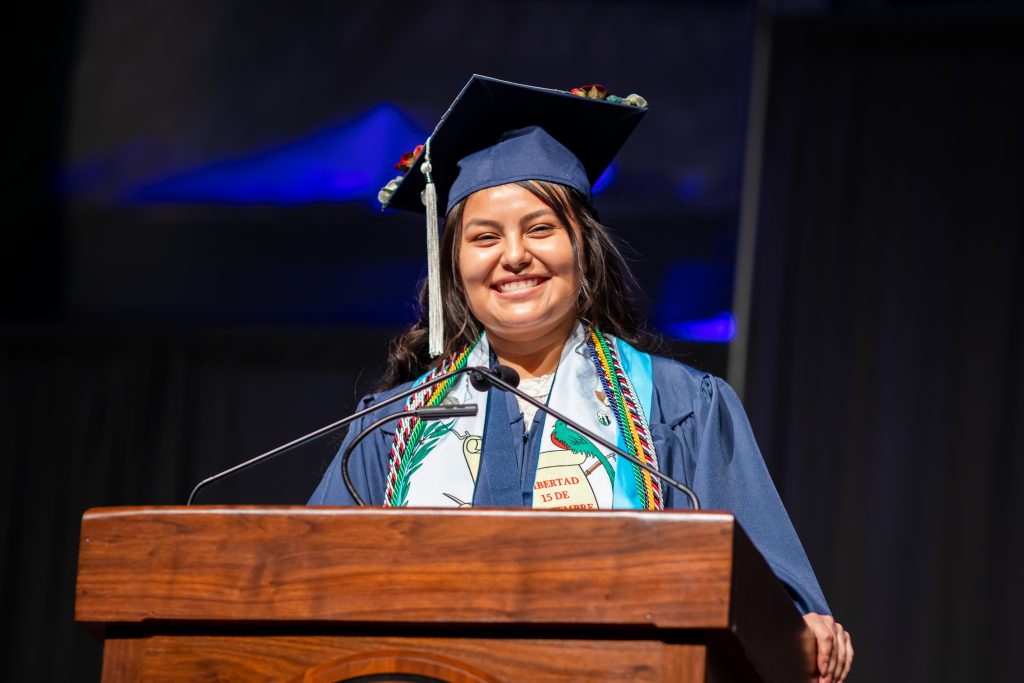 Saturday marked a milestone moment for Karen Santos Herrera as well as she continues living out the reality her parents envisioned for her more than two decades ago.

“When my parents first moved us to the U.S., they could not imagine what my future would be like, but they hoped and prayed that God had a plan for me and my siblings,” Santos Herrera said during her student address at the afternoon ceremony. “I am proud of the decision my parents made.”

Santos Herrera encountered and conquered a lengthy list of obstacles including her immigration status, finances and unknowns during the admissions process. Columbia College – where she earned a Presidential Scholarship and has been active with the Campus Activities Board, Mock Trial Team and TRiO Student Support Services – provided an educational home.

“Even though the entire college process was a daunting mountain to climb, my borders, my obstacles did not stop me from overcoming what seemed to be the impossible,” she said.

She shared her story in a way she hoped would inspire the crowd gathered for commencement.

“Nuestros sueños no tienen fronteras,” she said in Spanish, before translating the statement to English. “Our dreams do not have borders.”

“Remember this as you move on to life after college,” Santos Herrera said to close her remarks, encouraging her fellow graduates. “As of today, all our efforts can be used in our future endeavors such as graduate school or a career. Whatever we make of our lives, we must remember that the sky is the limit, and our dreams can break down any borders that stand before us.”

Brooke Fulliam remembers watching her mother graduate with a bachelor’s degree from Columbia College back in 2010, when Fulliam was a child.

Life has come full circle for the family since then. Their bond to CC has only grown stronger.

Fulliam, who received her Bachelor of Science in Accounting on Saturday morning, joined not only her mom but her aunt as CC alumni. Fulliam’s mom, Lisa Brenton, now is pursuing a master’s degree through the college. Fulliam’s younger sister, Morgan Brenton, enrolled as a student this past fall.

“I still admire my mother for having gone through her own path to receiving her bachelor’s degree while raising two children and working a full-time job,” Fulliam said during her student address at the morning ceremony. “If that is you, my hat goes off to you, and I want to tell you how proud your kids are of you, and what an inspiration you have been toward the future of their own life adventures.

“It was through watching both of my parents and other members of my family pursue their dreams that I grew admiration and the motivation to pursue all that I have done today.”

Fulliam, a native of Belle, Missouri, graduated from the Online Program.

She shared with the audience about battling bouts of anxiety and difficult losses while pressing forward in her educational journey with the support of family, friends and the CC community.

“Sometimes the race isn’t easy, but it is times like today that we realize the worth of every experience that we go through,” she said.­

Husband, wife graduate together — with a baby on the way 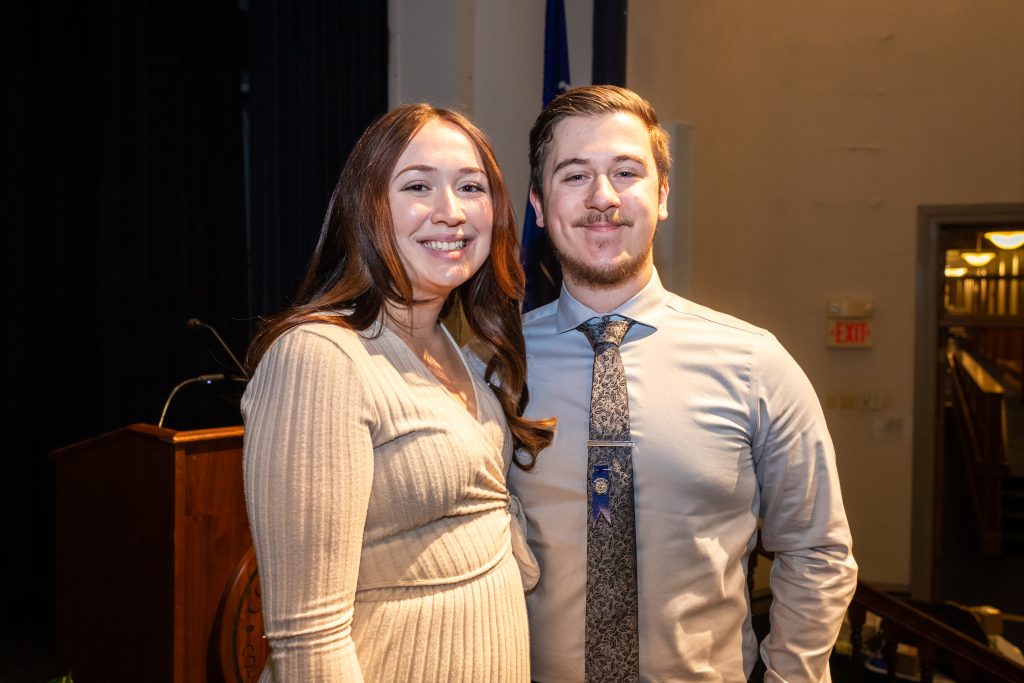 Andrew and Alaina Hamilton can’t get away from each other, and they would have it no other way.

Newlyweds from Fulton, Missouri, who married in August, the couple graduated together Saturday with their Associate in Science in Nursing degrees.

“It’s always very nice having my wife right next to me,” Andrew said after Friday night’s nurses’ pinning. “We remind each other of what we need to do. We know what’s going to come up and we make time for each other. It’s great to have each other.”

They met at a YMCA at the ages of 14 and 15 before graduating one year apart from Fulton High School.

Andrew originally pursued a pre-medical track at the University of Missouri before switching gears to nursing. The couple graduated as part of the same LPN class at State Technical College and they have been classmates once again this past year in their quest to become RNs.

“A built-in study partner right there,” Alaina said of her husband.

Their time at CC has been a positive experience, they said.

“I’ve connected a lot with my instructors,” Andrew said. “They have a dedication. They’re interested in what they teach. It’s really passionate here and I like that.”

Away from school, they have worked together at Fulton State Hospital since September 2020, joining a long list of family members who work in health care.

An upcoming life event will present their next change to navigate together.

“We’re expecting a baby boy in May,” Alaina said.

“We’re doing everything early, but we’ll have our 40s to relax and enjoy our lives,” Andrew said, half-jokingly.

President Dr. David Russell in his commencement address asked graduates whether they were more confident or nervous about the unknowns surrounding their future.

Russell told the class members they are not the same people as when they began at CC.

“We have taught you to examine ideas from multiple points of view, solve problems, behave ethically, adapt to changing conditions, collaborate and work in teams,” Russell said. “We have also shown you the importance of continuing to learn for a lifetime. We have prepared you to lead.”

He reflected on his own graduation from a small teachers college in Arkansas during “an exciting time clouded by uncertainty and more than a little fear.”

“Every generation faces a new set of challenges,” Russell said. “The only thing that matters is how you will respond when it’s your time to make the tough decisions.”

“Your strength, tenacity and focus are remarkable,” Singh said, “and you should be very proud of this accomplishment.”