With some creativity and ingenuity, recycled materials can become fine art. 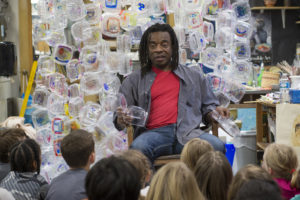 World-renowned artist Willie Cole has made a career out of reclaiming such seemingly mundane products as water bottles, high-heeled shoes, blow dryers and sheets branded with iron burns and turning them into works that comment on African-American history and American consumerism.

On the afternoon of Feb. 22, he held court in front of a classroom of enthralled fourth graders at Columbia’s Lee Expressive Arts Elementary School, nestled into a chair as the students sat cross-legged and hung on his every word.

They had been studying Cole’s artwork all school year and, in preparation, had been collecting recyclable plastic Clamshell storage containers. They watched as Cole hinged three of the containers together to make eyes, a face and a mouth. They showed their appreciation with a collective “whoaaaaaa.”

“Once you can see beyond the obvious, you’re in a whole new way of living,” Cole said. “As long as it works in your imagination, you’re teaching us to see it your way.”

Columbia College, the University of Missouri, Lee Elementary and the city of Columbia partnered to bring Cole to Columbia for a lecture at the MU Student Center and a day working with art students of all ages at Lee.

In turn, Columbia College students got the chance to interact with Cole during his visit, going to his lecture at MU, working with he and the students at Lee and showing him around the Sidney Larson Gallery on campus.

“It’s great when they can spend time with an artist of his caliber,” said Mike Sleadd, chair of the Columbia College Visual Arts and Music Department. “We have a lot of really good artists in Columbia, but it’s rare that somebody who’s internationally known and respected can interact with the community and share with them. Also, I think it’s great for them to hear his story and know a little about his background, hear the way he approaches problem-solving.”

Cole’s art is featured in such prestigious venues as the Metropolitan Museum of Art, the Museum of Modern Art and the Whitney Museum of American Art in New York City, the Philadelphia Museum of Art and the National Gallery of Art in Washington, D.C. He was the 2006 David C. Driskell Prize winner for contributions in the field of African-American art and history.

The Lee students made towers of the Clamshell containers and drew pictures on the front and back surfaces to make individual pieces of art within the broader installation. As a class of kindergartners and third graders left, a number of them stopped to proudly display their work for Cole.

“We have been studying him since the first week of school, particularly as he relates to American history with slavery and segregation, but also as he relates to current consumer culture with recycling,” said Ann Mehr, the art teacher at Lee. “I feel like that’s one of the most important things we can teach kids, is to take care of each other and the world. So he kind of embodies that in such a gentle, creative spirit.”

Joelle Thompson, a junior painting and drawing major at Columbia College, spent most of the day with Cole and enjoyed seeing how he interacted with the students as well as the materials they had collected. Thompson, who is an art education minor, was able to glean valuable lessons as both an aspiring artist and teacher. 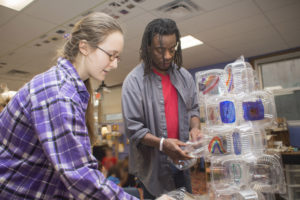 “I like hearing his ideas and his approach to a very creative process,” Thompson said. “Over lunch, we just sat there figuring out how we could possibly hang these and playing around with the containers, just snapping them different ways before we found something that seemed like it would work. He just has a very open, easygoing process. He just takes whatever it throws at him and works with that.”

The Lee students’ pieces went on display at Columbia City Hall on Feb. 23 and will be there through the end of April.