A home away from home 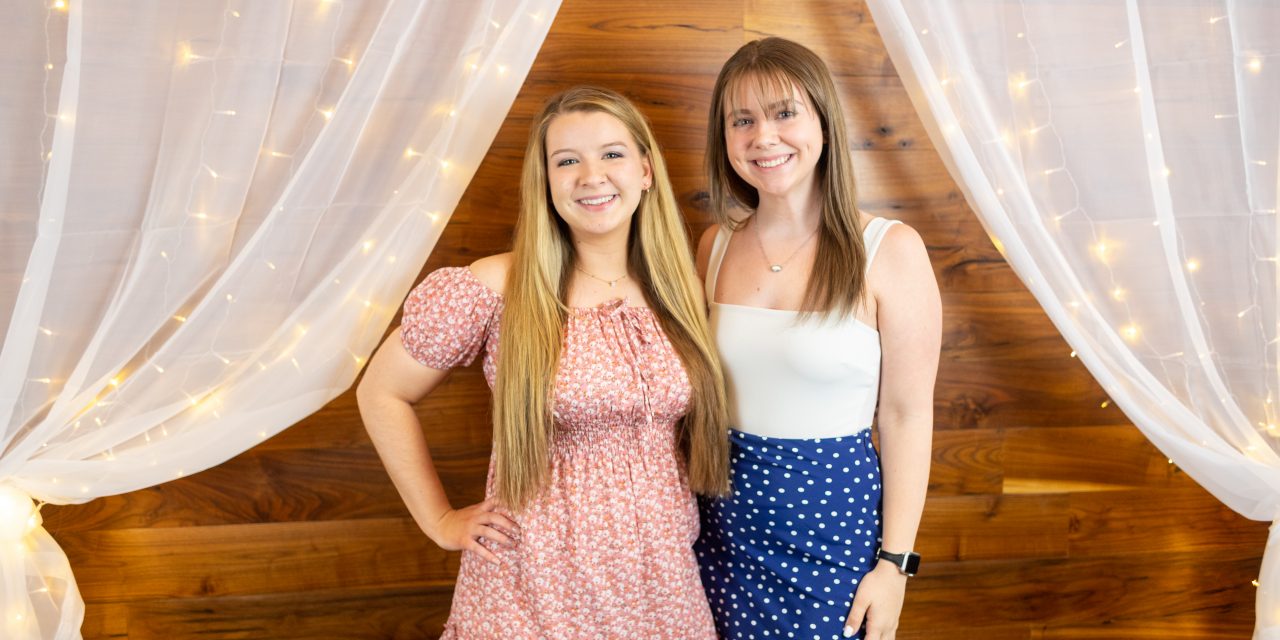 Have you ever thought back to your time at Columbia College and wondered how your various interactions during your time at CC sent you down your current path?

That path, and the ways it meandered, was undoubtedly different for each of us; for some, it was the roommate you met on move-in day; for others, it was bonding over memorable experiences – both cherished and less-than-stellar – in the classroom or the hallways of the dorm.

Several members of the Class of 2022 had those college experiences upended by the pandemic. While the adversity was universal, its impact was as varied as the makeup of the student body, as were students’ reactions to it. Some handled all of it better than others. Emma Chedwick ’22 and Taylor Hostens ’22 leaned into the disruption and ended up flourishing. 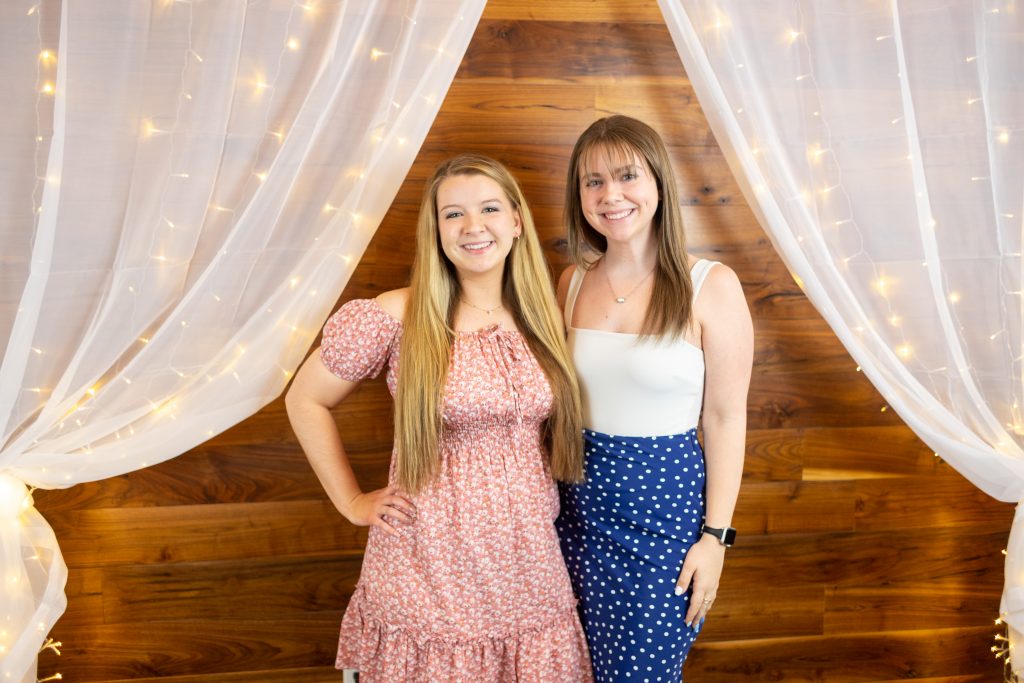 Getting To Know You… A Little

Hostens hails from Galesburg, Illinois, a town that serves Amtrak passengers headed to Los Angeles, San Francisco and Chicago. She found out about Columbia College through a college fair at Bradley University. Chedwick grew up in Mexico, Missouri, in a CC household; she recalls her mother, Sherri ’03, driving to Columbia three times a week for classes when she was younger.

Hostens and Chedwick first met in January 2018 at Columbia College’s Scholarship Day event, where incoming high-school seniors interview and compete for full-ride Presidential scholarships to the college. “We sat next to each other after the essay portion and talked to each other a little bit, and we both went home and told our parents about each other,” Taylor recalls. “We’re like, ‘Oh my gosh, we really liked each other; we’re going to be friends!’”

While true, it took more than a year for that friendship to sprout. Hostens was assigned to Miller Hall and Chedwick to Hughes for their freshman year. As is often the case, they instantly found strong relationships among those they lived closest to.

Part of the strength of those relationships stems from the college’s programs for first-year students, especially within the Day Program. Among those are the college’s Foundations class and First-Year Mentors program, where a veteran student and a faculty member assist small groups of new students.

The two weren’t completely isolated from each other, however, as they were enrolled in the honors section of a Foundations class. “We sat across the room from each other, and we didn’t talk all of freshman year, but we were watching each other from afar,” Hostens says. Their experience with their first-year mentor, Abby McCracken ’20, helped pave the way for their desire to pay it forward. “I remember Abby saying not to worry about taking changes and becoming involved, because college is where a lot of people find themselves,” says Hostens, who became a first-year mentor herself during the second semester of her freshman year. “I found a deep love for it. It’s a great opportunity to make connections.”

First-year mentors facilitate connections for first-year students and help them blossom into who they want to be. They also assist their faculty member with facilitating the Foundations course, which helps new students learn how to be a college student.

Both were also diving headlong into their studies, each earning positions on the college’s dean’s list. Chedwick earned degrees in accounting and business administration with minors in finance and management, as well as a criminal justice administration degree with a minor in legal studies, while Hostens earned dual degrees in forensic science and biology, plus a minor in chemistry. It’s no surprise that the duo made impressions on their instructors.

“From the day I met her, I knew (Emma) was something special,” says Dr. Ken Akers, assistant professor of Business Administration. “As we went along, I just came to respect her so much. She’s intellectually curious, has a great sense of humor, and constantly asks great questions that are grounded in reality. I can’t say enough about her.”

After beginning their college lives in different dorms, Chedwick and Hostens started to see their paths converge closer. Both were assigned to a new home, the sparkling New Hall that opened in the Fall of 2019, for their sophomore year. They were both placed on the fourth floor, two doors down from each other.

The Pandemic In The Room

Toward the end of their sophomore year – nearly halfway through their college experience – Chedwick, Hostens, and the rest of the CC community joined the world in having their lives upended by the pandemic.

“It’s awkward to become such good friends with someone right before COVID happened,” Chedwick says. “We were talking every single day, and then one day, we all had to move out and she’s now four hours away.”

All-night conversations in the hallway turned into four-inch flat-screen video sessions via FaceTime or Snapchat. The lack of personal interaction took its toll on a segment of the population designed for interpersonal connection.

“Before COVID, our friend group was probably 10-12 people. Once things were shut down, everyone went their separate ways, and people just kind of stopped putting in the effort,” Emma says. “It wasn’t just them; I know I did, too.”

Yet the pandemic wasn’t going to keep the pair from making lemonade out of the lemons they were given.

Leaders In The Making 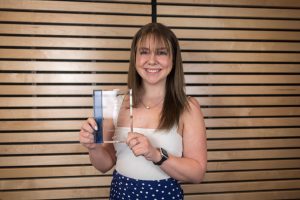 Like Hostens, Chedwick was also a first-year mentor. She had also become part of the leadership of Student Ambassadors. “You do it your first year because you want to try something new,” Emma says, “and then you realize how well you connect with the students, with the staff, with the faculty, and it makes you want to come back.”

Michelle Tharenos, who helps bridge the gap between prospective and currently enrolled students as CC’s coordinator of involvement and traditions, always appreciated Emma and Taylor’s desire to improve things on campus. “What I enjoyed most about them was their passion for the student experience,” she says. “I just appreciated their love for what we do and their understanding that it makes a difference.”

Although the pandemic had ended their sophomore years prematurely, plans still had to continue for the following year. Hostens’s roommate moved off campus, so Emma and Taylor decided to room together in Cougar Village for their junior year, with classes conducted in a hybrid format that allowed for instruction in person or via Zoom.

By that time, the two were nearly inseparable, aside from their classes. “We were always together,” Hostens says. “If there ever were a time that one of us was somewhere without the other, they’d always ask, ‘Where’s Emma?’ or ‘Where’s Taylor?’” 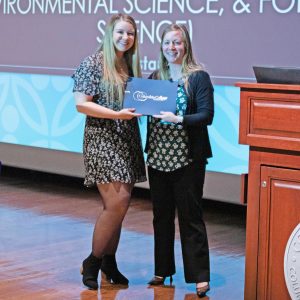 Hostens was the first to join the “real world,” quickly securing a position as a research technician with Elemental Enzymes, an agricultural biotech firm incubated at the University of Missouri and now headquartered in St. Louis. Now that she’s left CC, Hostens continues to take younger employees under her wing, helping the current crop of summer interns at Elemental Enzymes learn the ropes.

She credits Dr. Kent Strodtman, associate professor of biology, for fostering her interest in microbiology and influencing her to go down her current path. “He goes above and beyond to make students feel like they’re going to have success,” she says.

Strodtman was equally proud of Hostens. “Taylor worked well with all students in my courses and was a guide for younger students. She embodies the ideals of being a life-long learner,” he says.

Chedwick had an outstanding April, winning seemingly every award there is to earn at the college. Among them is the Elizabeth Award, established in 2018 by Vice Chair Helen “Dale” Coe Simons ‘65 and her family. This award recognizes a female senior who has shown dedication to Columbia College throughout her four years, and the Rogers Gate Award, the highest honor

awarded to a graduating senior by the Division of Student Affairs. The award is presented to students who have distinguished themselves as outstanding CC citizens throughout their collegiate careers.

Chedwick also gave the student address for the morning ceremony during the college’s Spring commencement exercises. One anecdote she shared during the speech involved her unique relationships with her classmates, faculty, and staff during her time at CC and how those connections extended to her professors’ spouses. “I knew she was applying for law schools, so I’d always update my wife (as we’d receive news from Emma),” Akers says. “When she got in, it was a celebration.” Chedwick begins classes this fall at the University of Missouri School of Law. Her current interest is corporate tax law.

But above all the accolades, the pair is proudest of each other. “We’ve been in the thick of it together,” Hostens says. “I got to be there right with her when she won all those awards, when she got her LSAT score, and when she got into law school. She was one of the first people that heard about my job after my mom and my boyfriend. We’re soulmates.”

Tharenos recalls their winding four years at CC with a sense of awe, noting that they didn’t spend much time together as freshmen, the social aspects of their junior year were almost entirely wiped out, and their senior year was spent trying to emerge from the pandemic. “They never quit wanting a good student experience for others,” she says. “We all got tired, but they never stopped. They not only didn’t quit caring, but they kept going.”

In a commencement speech to her classmates, Emma Chedwick ’22 invited the crowd to raise their hand if they’ve ever failed a paper, test or class. Listening from the stage, CC President Dr. David Russell and Dr. Terry Smith, professor of Political Science and director of the Honors Program, both gestured in confirmation.

Chedwick, a dual-major in Accounting & Business Administration and Criminal Justice Administration, shared the three main lessons she’s learned in her time at CC.

In his remarks, Dr. Russell offered additional encouragement that, given their experience at CC, they are now ready to lead. “Wherever you go from here, there will be people around you who need you,” he said. “When that time comes, I know that you, too, will not hesitate to step forward and do your part.” 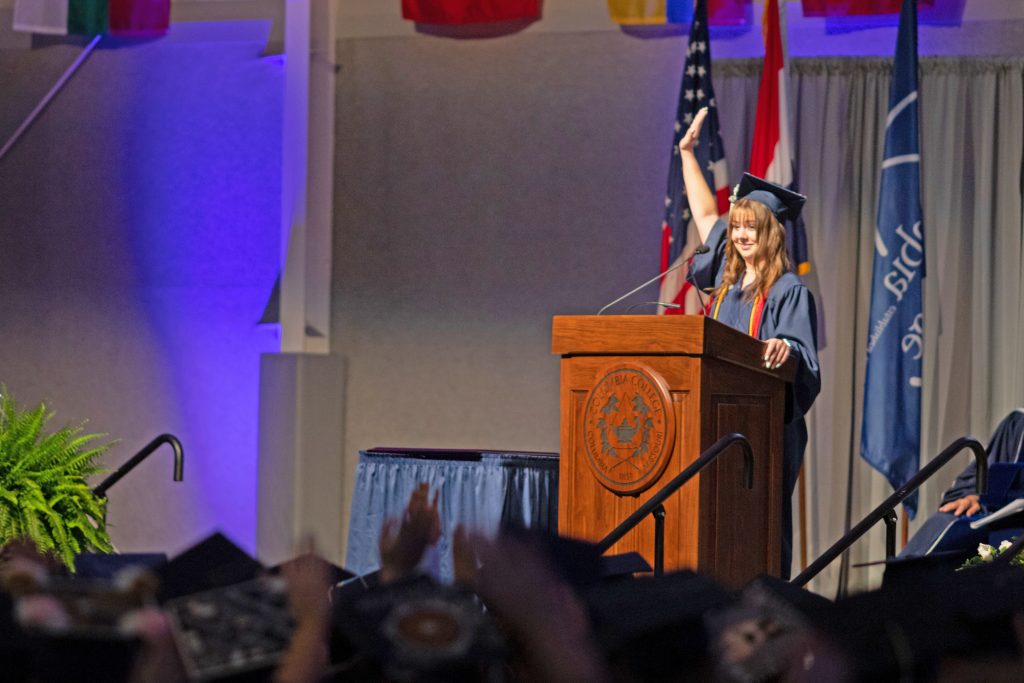