Camacho Coffee a labor of love for Jesse Walters ’12 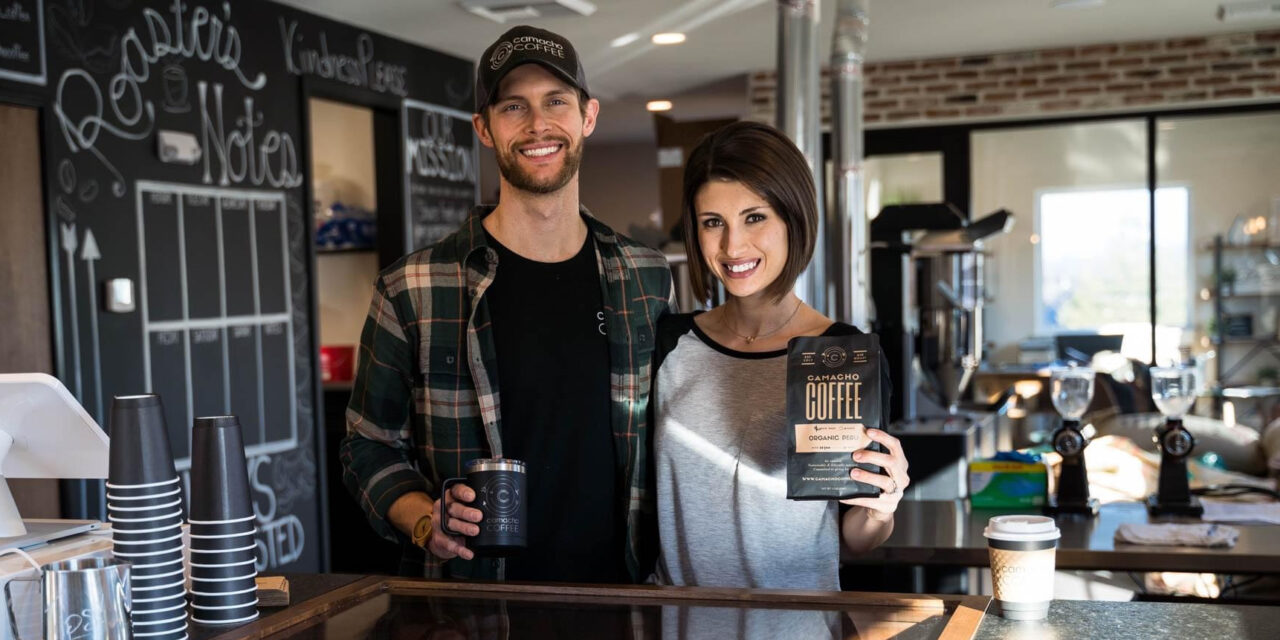 The idea for Camacho Coffee started when Jesse Walters ’12 was looking for a coffee that his fiancée could drink. In 2016, while in college, Megan was told by a doctor to try quitting coffee to see if it would help with inflammatory issues.

“She really wanted to be able to drink coffee so we started doing research to look for alternatives with lower acidity,” Walters says.

First, Walters tried making a cold brew, which is thought to be less acidic. When they weren’t happy with the taste, he decided to try his hand at roasting beans. He started by using a crank-style popcorn popper over the stovetop to roast the beans.

“The first time, the smoke alarm went off, and it was a definite failure,” he says. “After a few tries, it started to taste better, and Megan was able to drink it.”

This was the beginning of a new business venture for the couple. After perfecting his roasting method, Jesse began sharing it with others. At the time, Jesse was an admissions recruiter at Columbia College.

“I used to carry around Ziploc bags of the beans in my pocket,” he says. “Whenever I would talk with business owners in Columbia, I’d ask them if they’d like a sample to see what they thought of it.”

After months of giving out his roasted coffee beans, a café owner in Columbia approached Walters, asking if they could carry it in their establishment. “I told them that I’d be right back because I need to get a business license,” he says.

Walters and Megan, who had married by that time, set up the business together. They named it after Megan’s mother, whose last name is Camacho. Walters says they started with a 2½-pound sampling roaster to allow them to roast coffee beans at their house.

“At first, it was in our basement, hooked up to our dryer vent,” he says. “Every time we did laundry, we had to unplug it.”

Soon, another business offered them some space in their warehouse to set up their equipment in an area about 10 feet by 10 feet, where they paid their rent with coffee beans.

“Our marketing for years was just passing out coffee and talking with people,” Walters says.

As word of mouth grew, so did their business. Today, Camacho Coffee supplies coffee to more than 40 wholesalers and 11 grocery stores. In December 2020, Camacho Coffee moved into its own space, a new development on the southeast side of Columbia, Missouri.

“It’s near a residential area, and the landlord had talked with the neighbors and had their support for building up the area,” Walters says. “He said he had always envisioned that a coffee shop would be part of the area. After we met with him, we knew our company aligned with his vision, too.”

The new space gives them more room for roasting and manufacturing, including two air roasters that can handle a total of 20 pounds of coffee at a time. The equipment roasts the coffee beans on a bed of hot air rather than the surface of the drum to allow them to roast evenly for a more aromatic flavor and less acidic taste, Walters says.

Customers at the new location can visit the tasting room to try out their different coffees, including Colombia Bold, Madagascar Vanilla, Brazil and an organic Peruvian coffee.

“I really liked Peruvian coffee but hadn’t been able to find it in this area,” he says. “It’s one of our most popular.”

Growing up on a cattle farm in nearby Boonville, Walters says he knew he wanted to start his own business but wasn’t sure what it would be. He says his goal was in large part inspired by his time as a business student at Columbia College.

“My junior year, I took an entrepreneurial class. The teacher talked about different ways to start a business, and it was like a light bulb went on. It was a huge influence on me.”

Today, the couple not only found success in their business, but they found ways to give back to their hometown community as well. They give 10 percent of their proceeds to charities in Columbia.

“We put that in our mission from day one,” he says. “We really love where we live and wanted to find a way to give back.”

The CCAA invites alumni to share personal and professional announcements. Search the class roster and submit an update at my.ccis.edu/alumniclassnotes.